Nancy was none too fond of thunder. (It had something to do with her being shot out of a cannon one time too many as a young child.) Fortunately, Nancy had no inkling of the coming storm.

Nancy, Joe, Max, and Genius Kelly pressed on to the hill and the sea beyond. It seemed to Joe that they had been walking for quite some time and still there was no sea in sight.

James, Simon. Dear Mr. Blueberry. 32P. Gr PreK-3.
Here dialogue is confined to letter writing, as a young girl writes to her science teacher to tell him about the whale she has discovered in the fountain in the square. Witty and ironic and sweet, their exchange speaks to the joys of learning, and the meaning of trust.

Raschka, Chris. Yo! Yes? 32p. Gr. PreK-2.
In only 34 words Raschka chronicles a vivid, ebullient budding friendship as two young men, one white and one black, meet on the street and exchange a few words of openness that amount to volumes.

Shulevitz, Uri. The Secret Room. 32p. Gr. K-5.
Impressed by the wisdom of a wanderer, the King makes him treasurer of the kingdom. A jealous counselor attempts to bring the wise man down, but his clever answers to the King’s questions save him. Shulevitz’s trademark saturated, angular paintings ground this tale and make it shine.

Konigsburg, E.L. Silent to the Bone. 272p. Gr. 5-9.
Branwell can’t talk. The babysitter snatches the phone away from him and tells the 911 operator “He dropped the baby.” Can his best friend Connor help him defend himself against mounting allegations when Branwell won’t, or can’t speak?

Myracle, Lauren. ttyl. 234p. Gr. 6-12.
Three friends, all sophomores in high school, live out the great and hysterical drama that is adolescent, all through the text message medium. At once superficially entertaining and powerfully affecting, this is a novel that eschews gimmick and embraces storytelling.

Pratchett, Terry. Nation. 384p. Gr. 9-12.
In utterly original parallel narratives, this heart-rending novel tells the story of two young people who forge a bond, and a nation, when they’re thrown together by tumultuous circumstance. A massive storm and subsequent tidal wave wipe out a primitive village and wreck a Victorian-era British ship on the ravaged shore, leaving the only survivors, Mau, a native boy, and Daphne, an English girl, to build a new community as they struggle to start over.

R.A.F.T. is an activity that integrates reading and writing.  It is a way for the reader to take an active role in the story and creatively explain a situation in the work from the perspective of a character. In addition, it is a higher-level thinking activity that requires the reader to go beyond basic comprehension of the material. The reader has to abandon his or her own opinions of the story and enter the mind of a character.

The critical aspect of this activity is that the reader must truly understand the chosen character and his or her motivations and personality traits. By accepting this adventure, you have the opportunity to become the author of the story who creates an adventure for the characters you have learned about in this journey through The Exquisite Corpse Adventure. To complete this adventure, let’s first understand what R.A.F.T. means.

R = ROLE of the writer. Which character will you become?
A = AUDIENCE of the writer. To whom are you writing?
F = FORMAT. What format will the writing take? A letter? Song lyrics? Classified ad? Poem? Etc.
T = TOPIC. What is the subject or the point of this piece? 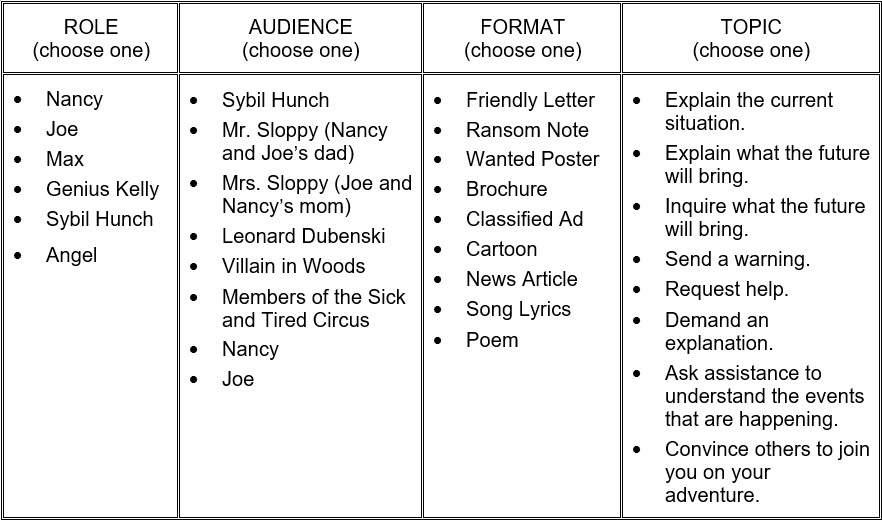 For example, you might choose to be Nancy writing a friendly letter to Sybil Hunch inquiring what the future will bring. Another example might include you being Angel designing a brochure for the members of the Sick and Tired Circus to try and convince them to join you on your adventure. The possibilities are endless. Chose one topic from all the categories, and then you can begin to create your writing adventure.

Check out another version of the R.A.F.T. activity in Episode 20.

In their respective illustrations for Episodes 9 and 10 of The Exquisite Corpse Adventure, both Chris Van Dusen and James Ransome have skillfully contrasted light and dark values in their paintings creating drama and depth. Taking advantage of the opportunity to compare and contrast their work, I have created one Talk Art! section that discusses both illustrations and includes coordinating art activities: “Shading and Modeling with Light and Dark” and “Arranging and Drawing a Still Life.”

Click here to visit the Talk Art! section for both Episodes 9 and 10.

Episode 8 ends with Nancy, Joe, Genius Kelly, and Baby Max setting off toward the Saline Solution Sea. As they approach the sea in Episode 9, Genius Kelly admits he is afraid of water. Nancy is understanding, but says to Genius, “If we’re going to find our parents, we have to cross the sea.” Genius explains matter of factly that he will find another place where he can walk across, then leaves the kids. How did you react when Genius Kelly—who is the twin’s guardian—left the kids? Were you surprised? Worried? Thinking “good riddance?!” What does this action reveal about Genius Kelly’s character? What other stories or books have you read in which a supervising adult character leaves the children he or she is responsible for? Do the children rise to the challenge? How do you think Nancy, Joe, and Baby Max will fare without Genius Kelly?

Lightning strikes as Nancy enters the water with Baby Max. In the sea’s reflection, she sees, “….a man and a woman, their faces pressed against a door. The image only lasted a brief second, but Nancy’s heart told her these were her parents, and they were calling out to her.” What do you make of this “reflection?” Is it a vision? Do you think she imagined it?

Angel tosses a bottle to Joe that contains a key and a note. The note reads, “Guard this key with your life. Godspeed…When you see your folks, tell them Angel sends his felicitations.” This is the first time Nancy and Joe have been given any type of object or token since they left the circus. Nancy declares that she knows what the key will open. Do you know? Imagine for yourself what the purpose and usage of this key will be. Will it open a real door somewhere? An enchanted door to a fantasy place or another dimension? Or perhaps might the key be a magical object that opens some type of knowledge they need to complete their journey? Write a paragraph or two or tell what you think will happen next with the key!

Think about what types of objects might be helpful to Nancy and Joe as they search for their parents. If you could enter this quest as a helper or a villain, what would you give them? Something utilitarian? Magical? Dangerous? Is it shiny, rusty, or glowing? Describe the object in detail, and be sure to explain how it is to be used. 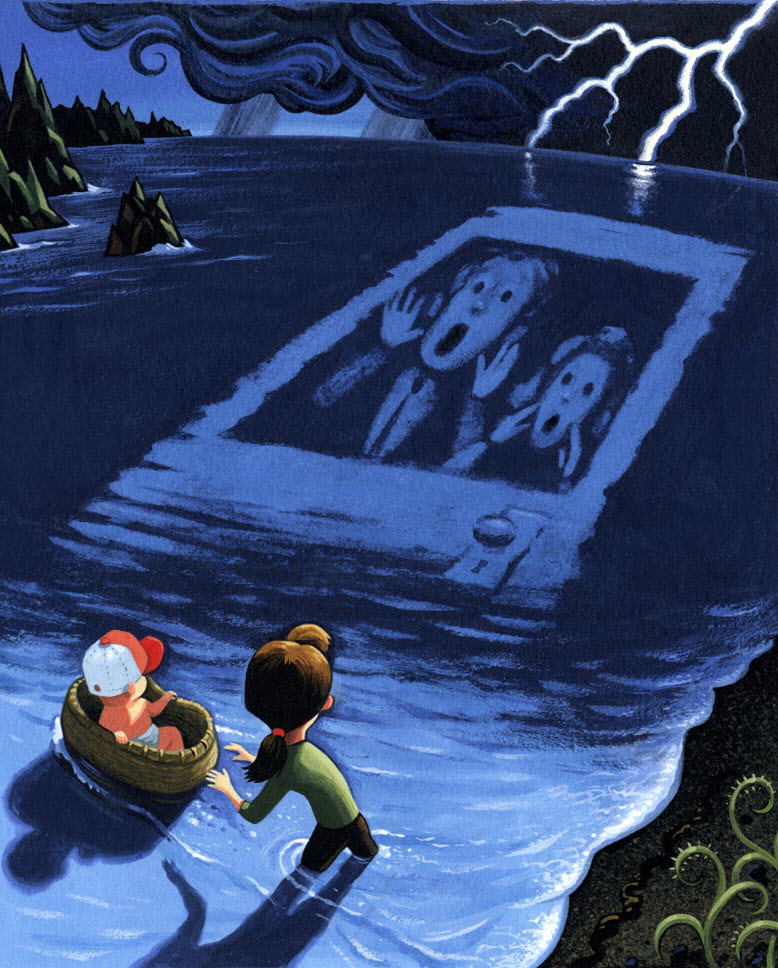