“Over Easy”
by Katherine Paterson, illustrated by Calef Brown

If you have been following this adventure as closely as the authors have hoped, you will not be surprised to know that at this moment of supreme crisis, Nancy, the brave, the intelligent, the moral Nancy, took charge of the situation.

Aardema, Verna, illustrated by Petra Mathers. Borreguita and the Coyote: A Tale from Ayutla, Mexico. 25p. Gr. PreK-2.
Coyote thinks that a lamb dinner is just the thing, but Borreguita (“little lamb”) slyly tricks the hungry carnivore out of his gustatory pleasures. The lamb escapes being Coyote food by using Coyote’s own greed against him. Aardema’s storytelling makes this a delicious read-aloud, and Mather’s glowing palette of warm oranges, hot pinks, and cool greens add to the visual feast.

Carbone, Elisa, illustrated by E.B. Lewis. Night Running: How James Escaped with the Help of His Faithful Dog. 40p. Gr. K-4.
James plans his escape from slavery with one regret: he must leave his noisy dog Zeus behind. Zeus, however, will not be left, and the loyal dog proves his mettle by fighting slave catchers, hunting squirrels for food, and helping Jim across the Ohio River. This evocatively illustrated picture book is based on the true story of James Smith, who successfully escaped slavery in the mid-eighteenth century.

Lunge-Larsen, Lise, illustrated by Mary Azarin. The Race of the Birkebeiners. 32p. Gr. K-3.
In thirteenth century Norway an infant prince is threatened by nobles seeking to keep him off the throne. The Birkebeiners, soldiers loyal to the baby’s dead father, help the prince and his mother escape across the mountains in a freezing blizzard. Hand-tinted woodcuts depict the harrowing adventure in dramatic compositions. This retelling is based on “Håkon Håkonssøn’s Saga,” penned by Sturla Tordsson in 1264.

Aiken, Joan. The Wolves of Willoughby Chase. 168p. Gr.5-8.
Bonnie and Sylvia have nowhere to turn when their wicked governess takes over the family manse and send the two girls to a dreadful orphanage. Will the brave little orphans escape the ravenous wolves roaming the snowy countryside? Will justice be served and the villains confounded? Set in an alternative eighteenth century England, this adventure rollicks through the Victorian tropes later imitated by Lemony Snicket, and is a terrific read-aloud.

Coder, Zizou. Lionboy. 304p. Gr. 4-8.
In the not-too-distant future a boy with the ability to speak the language of cats sets out from London to seek his kidnapped parents, only to find himself on a Paris-bound circus ship learning to train lions. Chases and escapes keep this fast-paced novel speeding toward a cliff-hanging conclusion. This is the opening title in a trilogy concluding with Lionboy: The Chase and Lionboy: The Truth.

Hehner, Barbara. The Tunnel King: The True Story of Wally Floody and the Great Escape. 160p. Gr. 5-9.
Wally Floody, a Royal Canadian Air Force pilot, was shot down over Germany in 1941. A prisoner of war in Stalag Luft 3, Floody became “the Tunnel King,” and helped build the escape tunnels for the most famous POW breakout of World War II. Read this and then sit down for a family viewing of The Great Escape, the award-winning film for which Floody served as consultant.

How to End a Story

In this concluding episode, author Katherine Patterson has captured many of the elements that have been presented in earlier episodes, and she has created her own action to provide an ending to The Exquisite Corpse Adventure.

Think about the story elements presented throughout The Exquisite Corpse Adventure, such as the settings and the order of events. Also think about the characters and the problems they face as this final episode begins:

With all of this in mind, how would YOU end The Exquisite Corpse Adventure?

Could you rewrite the end to imply that there might be more to the story in the future?

What other possible endings might there be if the Eggy-Things had not “whipped themselves into a frenzy”?

For his Episode 27 illustration of The Exquisite Corpse Adventure, Calef Brown creates a collage of the adventure’s characters, with the Sloppy family featured in black and white.

In the Talk Art! article titled “The Art Form of Silhouettes,” Mary Brigid Barrett describes the style used by Calef Brown for his Episode 7 illustration:

Ask young people to take a close look at the illustration for Episode 27 pictured here. Do they think that Brown uses flat graphic space, a limited palette, strong diagonals, and the silhouette in this illustration? Ask them to explain their reactions.

Read more about the artistic history of silhouettes, as well as relevant discussion questions and an art activity to share with young people, in the Talk Art! article “The Art Form of Silhouettes.”

Have you ever heard someone use the phrase “Achilles’ heel?” “Achilles’ heel” is simply a metaphor used to describe a particular weakness or vulnerability. The phrase comes from a Greek legend about a hero named Achilles whose mother dipped all of his body into the River Styx to make him invulnerable. Unfortunately, she missed a spot (his heel!), and Achilles was killed when a lone arrow found its mark there. (Take a trip to the library, and read more about Achilles in a book about Greek Mythology. Or, check out The Iliad by Homer, in which Achilles plays a starring role.) Think about the phrase “Achilles’ heel.” Do any characters in The Exquisite Corpse Adventure possess an Achilles’ heel? Does either Nancy or Joe have one particular vulnerability? What would you say is the Achilles’ heel of the Eggy-Things?

The alien Eggy-Things certainly have a love for bad jokes. How does this lead to their demise? In your own life, have you ever found laughter to be a bad thing? For example, have you ever laughed at the wrong time? What were the consequences?

The Exquisite Corpse Adventure ends happily ever after for Nancy and Joe, their parents, and their friends. Imagine a different ending in which something goes wrong, and everyone does not live happily ever after.

Imagine the other dimension to which Roberta and Genius Kelly go. What will life be like for them there?

Write a review of The Exquisite Corpse Adventure, and submit it to your class or school newspaper, newsletter, or literary magazine. Be sure to write the review to an audience of readers who have not read The Exquisite Corpse Adventure. Start by summarizing the plot and characters. Then describe the elements of the story you liked, as well as those you may have found disappointing. What worked? What didn’t work? Did the story come to a satisfying conclusion? Would you recommend this story to other readers? Be sure to explain your opinions. 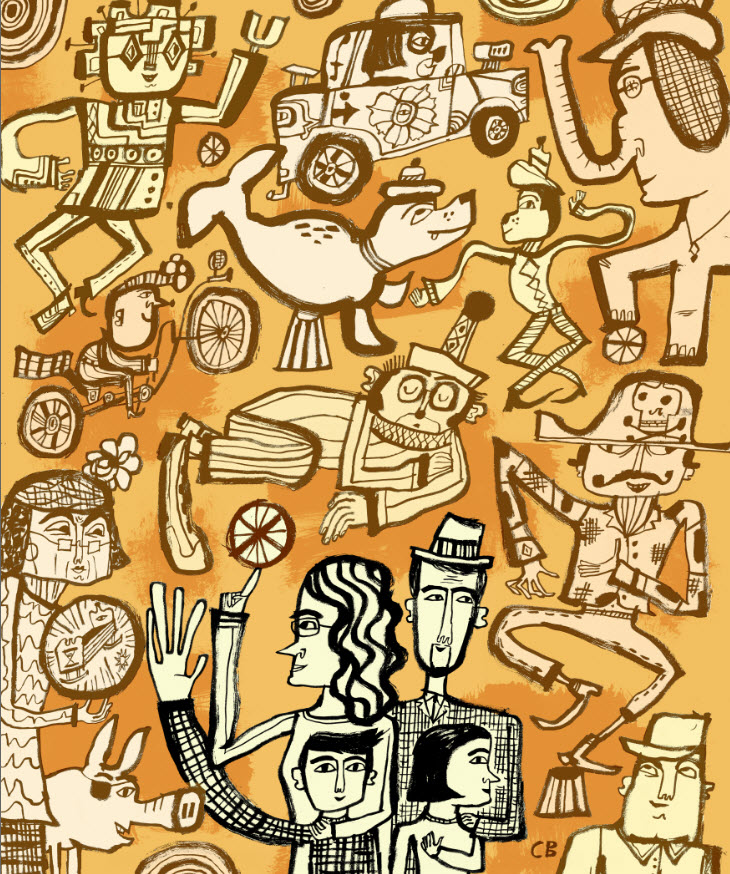