“The Final Scramble”
by M.T. Anderson, illustrated by James Ransome

It was a terrible and frantic night in those woods. The wind blew through the trees. It smelled of sulfur . . . Or eggs. The trees tossed back and forth, as if whisking an omelet in the thick, yolk-scented air.

On the one side of the woods, the two twins scampered through pines towards Pirandello’s shack. They were searching for their interstellar pig protector. And on the other side of the wood, a motley ban wandered through poplar trees: a witchy gypsy, a pirate named Angel, and a bobble-headed robot riding on a circus elephant. They too were searching for their friends—for the twins, the pig, the whole lot.

Feiffer, Jules. Meanwhile. 32p. Gr. K-4.
Raymond’s mother is calling, but he is engrossed in his comic book. Seeking to lose himself further, he employs a comic book trope, and scrawls “meanwhile” across his bedroom wall, for a change of scene. Immediately he is transported to a pirate’s galleon. Another scrawl takes him to the Wild West, and then into outer space. The dangers increase apace until he happens upon another familiar turn of phrase that saves his day.

Noble, Trinka Hakes, illustrated by Tony Ross. Meanwhile, Back at the Ranch. 32p. Gr. PreK-3.
Rancher Hicks is bored. He takes a trip into town in search of a little excitement, but all he finds is sleepy Sleepy Gulch. As he gets about his humdrum day, his adventureless activities alternate with his wife Edna’s exciting escapades “back at the ranch.” He watches a turtle cross the road; she stars in a Hollywood movie. He gets a whisker trim; she meets the President. Tony Ross’s ebullient illustrations maximize the comedic fun.

Armstrong, Jennifer. The Kindling. 224p. Gr. 6-10.
In 2002 the earth’s adult population was eradicated by a virus. Five years later, seven children have cobbled together the means of survival, but only just. As supplies dwindle, they set off for Washington DC, in search of someone called President, who may be able to help. The world they inhabit, at once incomprehensible and chillingly familiar, makes a gruesome backdrop for a gripping story with an irresistible cliffhanger ending.

Montgomery, R.A. The Abominable Snowman. 144p. Gr. 4-7.
You are traveling to Nepal with your best friend, Carlos, in search of the Yeti. Carlos gets lost in the mountains. A Yeti has been sighted. A storm approaches. What will happen? In this Choose Your Own Adventure Series title, you choose the pages the story follows, and your choices determine the outcome. Will Carlos survive? His fate is in your hands.

Snicket, Lemony. The Bad Beginning. 162p. Gr. 2-5.
Violet, Klaus and Sunny Beaudelaire are in trouble. They are newly orphaned, their parents having been lost in a fire, and Count Olaf, their miserly uncle, and newly appointed guardian, has designs on their family fortune. Things go from bad to worse at every turn, with peril fairly dripping from the page. Snicket’s broad, wry, comic telling mitigates the macabre, offering a sweet-and-sour, delightful beginning to a delectable Series of Unfortunate Events.

The pun or paronomasia is a form of word play that exploits numerous meanings of a statement, allowing it to be understood in many ways, intended for a humorous effect. Usually, puns are created using homophonic language (a homophone is a word pronounced the same way, but differing in meaning).

A pun must be deliberate. Authors like William Shakespeare, Oscar Wilde, and M.T. Anderson have used puns! Puns can be visual as illustrated by The Far Side and Lost Consonants. Puns can also be used in designations (e.g Cane and Able Mobility Health Care) and can also be found in music.

An adage is a short saying that transmits wisdom.

Episode 26 has its share of puns and adages. Examples include: “throwing pearls before swine” and “Soon, the yolk will be on them!”)

Go back into the text of this episode and see if you can identify the puns and adages. Then see if you can make up a pun or adage of your own….and draw a picture of it!

James Ransome creates a collage of characters for his Episode 26 illustration of The Exquisite Corpse Adventure, with villain Boppo the clown right in the center!

For information on how artists like James Ransome create richly colored paintings using wet washes of color, as well as a color exercise you can share with young people, refer to the Talk Art! article “Wet Washes and Rich Color: Creating an Illustration Layer by Layer.”

We learn more about the intentions of the aliens in this episode, “For years they had prepared to invade through the holes that Alistair Sloppy had opened up. And now, this very night was the moment for the grand attack.” Why do you think the aliens have chosen to invade? What do they plan to do? Co-exist in peace or take control? Cite examples from this and previous episodes to support your case.

Have you read other stories or books about alien invasions? Are the aliens in these other books friendly or villainous? Do they first enter a new world in disguise and deceit as the Eggy-Things have done? Have these other alien characters colored your expectations for the Eggy-Things? How so?

The Exquisite Corpse Adventure began with Nancy and Joe examining the mysterious card that prompted their escape from the circus and their episodic journey:

PIECING TOGETHER THE EXQUISITE CORPSE.

Nancy and Joe fulfill their mission to rescue their parents in this episode and the Sloppy family is reunited at last. Would you say that the rescue and unification of the family in this episode is the climax of the story? Why? What other conflicts need to be resolved?

When Nancy tells her parents she is becoming part wolf, her father notes, “Next time we leave, we have got to find a better day-care situation.” Do you think the Sick and Tired Circus was a good place to leave Nancy and Joe? How have the twins benefitted from the experience? Has growing up in the circus been detrimental to Nancy and Joe? The Sloppy parents put Nancy and Joe in the circus to protect them from the aliens. Can you think of other situations in which parents may need to place their children with other caregivers for a time to keep them safe?

Episode 26 is the penultimate episode in The Exquisite Corpse Adventure! As this episode ends, the wolves report that the alien invasion is imminent, and Pirandello reports that the circus train is quickly approaching the demolished track. Libby Sloppy summarizes the current state of affairs, “The train’s in danger! The Eggy-Things are coming! What will we possibly do?” What will they do?! Predict what you think will happen in the final episode. Write a paragraph that summarizes how you think this will end. Set it aside, and be sure to compare your prediction with the concluding episode when you read it. 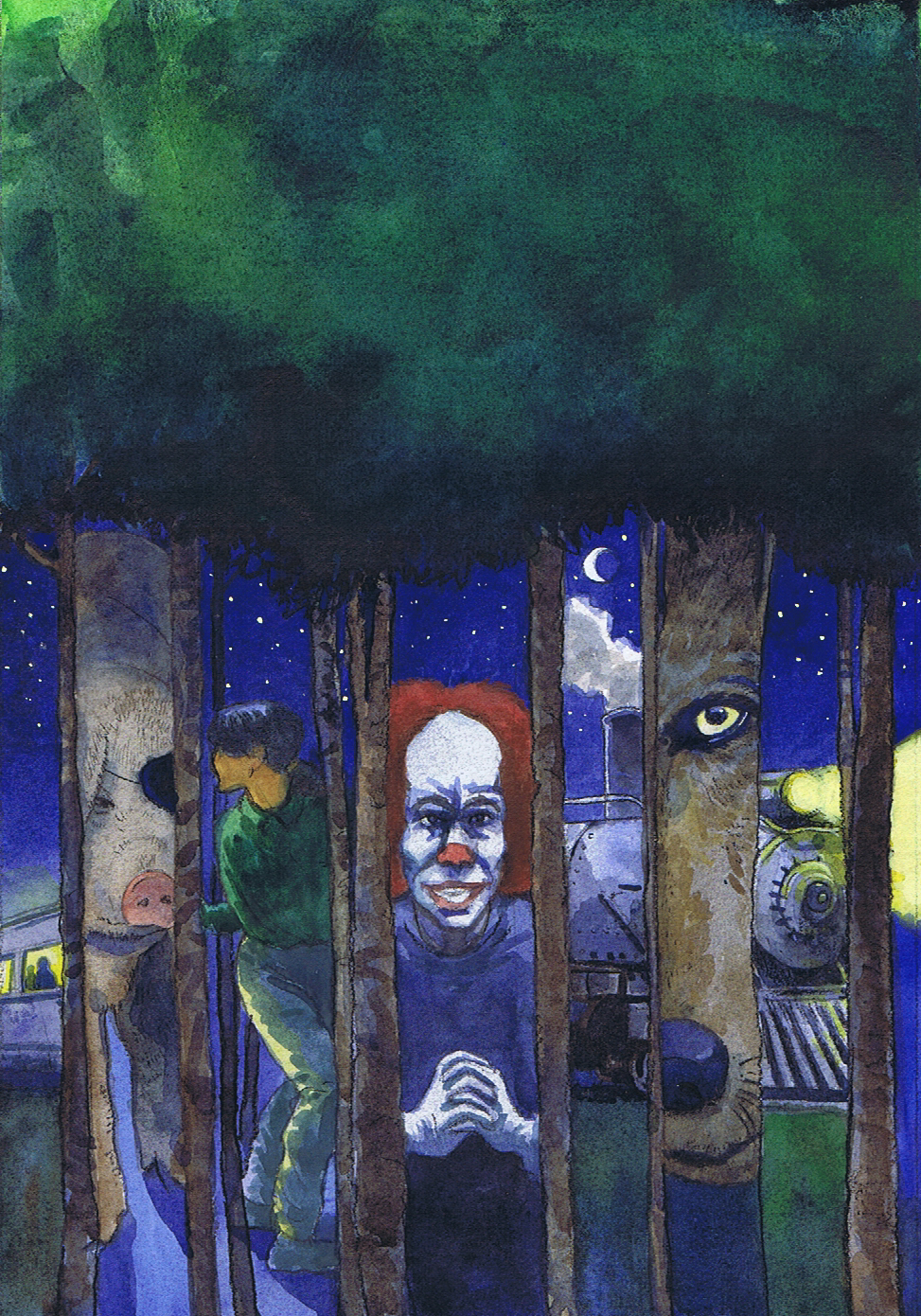