The moment everything went silent Doris the Dormouse became very nervous. Silence was a kind of void in which her thoughts became lost like wooden needles in a wooden haystack. It was only through hearing herself speak that she knew what she was thinking, and because she was so squirrely, even for a Dormouse, she nervously began to sing in a voice that was not unlike the sharp siren for a forest fire alarm.

Martin, Jacqueline Briggs.  The Water Gift and the Pig of the Pig.  32p. Gr. K-3
Isabel and her grandfather the sea captain share a magical gift for finding things. Isabel is shy and when her best friend the Pig of the Pig goes missing she must awaken her courage to find her precious friend. Isabel soon learns that you must believe in a gift in order to make it your own. Linda Wingerter’s stunning illustrations take you to the coast with Isabel and her family.

Rylant, Cynthia.  Poppleton.  48p. Gr. 1-2
What would do if you had a friend who wanted to feed you oatmeal, toasted cheese and spaghetti all day long?  Even a pig knows when enough is enough. Poppleton learns that it is okay to tell a friend that you want to be alone. There is a new pig in town and his name is Poppleton.

Brooks, Walter R.  Freddy the Detective.  263p. Gr. 3 -5
There is a crime wave at Bean’s Farm and Jinx the cat’s name must be cleared. Freddy the pig, inspired by a Sherlock Holmes book he found in the barn, decides to become a master detective with the help of his sidekick Mrs. Wiggins the cow. Introduce yourself to Freddy, one of the first literary pigs.

Hearne, Betsy Gould.  Wishes, Kisses, and Pigs.  133p. Gr. 3-6
Eleven year old Louise Tolliver just made a wish on the first star of the night. Now her wish has come true but it is not what she expected. Her brother has disappeared and it looks as if he’s turned into a pig. Louise has to decide how to get him back using the only tricks she has, wishes, kisses and spells.

Zindel, Paul.  The Pigman.  166p. Gr. 6-9
Funny old Mr. Pignati has found some new friends. Lorraine and John are two bored teenagers who stumble upon the Pigman during a prank. Through his kindness the teens begin to enjoy a little bit of happiness. When their new friend puts his trust in them though, they betray him. Now the only way for John and Lorraine to find peace is to write down The Pigman’s story.

The title “Que Sera, Sera” originally appeared in Italian in Christopher Marlowe’s play Dr. Faustus (“Che Sera, Sera”). “Que Sera, Sera,” a 1956 academy award-winning song written in 1956 by Jay Livingston and Ray Evans (and the title is in ungrammatical Spanish), has over time become part of American pop culture. It is a song that has been used many times, for many different purposes (in movies, on record albums, and in commercials).

“We live as we dream – alone.” (moaned and quoted by Joe in this episode) is a reference to text taken from the novella, Heart of Darkness by Joseph Conrad. This literary work was written in 1902 as a story within a story.

Understanding references to pieces of music, or art, or literature, when reading a literary piece enhances the understanding of what is being read. It also broadens and deepens one’s knowledge, allowing connections to be made.

Other references have been made as the characters in the episodes have evolved.

Go back into the text and reread previous episodes to see if you can identify references that have been made previously. Hint: What references can you find to nursery rhymes and to pieces of literature?

Take one of the major characters in The Exquisite Corpse Adventure and write a short paragraph of your own, creating dialogue that includes a reference to a piece of literature, work of art, or piece of music of your own choice and then share your paragraph with a friend or member of your family. See if they can identify the reference, and test their knowledge to see what connections they can make!

In this illustration for Episode 25 of The Exquisite Corpse Adventure, Chris Van Dusen depicts the “whitish, yellowish goop…slowly seeping from the mail slot” in such a dramatic way that it looks like it just might ooze right off the page!

Many of the illustrations created for The Exquisite Corpse Adventure include a sense of movement. For more information about how artists use movement in their paintings and drawings, as well as drawing exercises to share with young people, refer to the Talk Art! article “Energy and Motion in Art.”

When Joe and Nancy ask Doris and Genius what they are singing about in the song “Que sera, sera,” Genius answers, “We are singing about fate … About not knowing what the future will be, yet having to accept without disappointment what the future will offer each one of us.” Are you familiar with the concept of “fate?” What do you think of Genius’ definition? Is there a difference between “fate,” “chance,” and “choice?” In the paragraphs in which the characters discuss “fate,” what do you think Genius is trying to communicate to Nancy and Joe? Do you think he is communicating something to the readers about the fate of Nancy and Joe within the story?

At the heart of this episode is a dilemma. Nancy and Joe are confronted with a “terrible” choice—whether to open the door or seal it. Joe and Nancy desperately want to open it, but Genius insists that is the wrong move. Genius summarizes their choice by stating, “What would be worse? [Your parents] find you dead, or you find them dead?” Put yourself in the twin’s shoes: would you open the door or seal it? Why? Who ultimately makes the decision about how to proceed? How do they decide? Are you surprised? Have you ever been confronted with a seemingly impossible situation in which you were faced with two choices, neither of which seemed better than the other? How did you resolve the problem?

Irony is “a contradiction or incongruity between appearance or expectation and reality.” Genius explains his intuitive knowledge regarding the substance coming through the mail slot in the door by stating, “Every pig has been taught from birth to know the smell of an egg means doom for our porcine breed.” This statement is followed by the four character’s collective thought, “How is it . . . that children learn their morals, ethics, and values from early children’s books populated with clever and cute animals which they, the readers, later learn how to eat?” Would you say this question presents an irony, a difference between what one would expect and the reality? How did you feel when you read this statement? Does it make you uncomfortable? Can you explain it? Can you cite other examples of irony in The Exquisite Corpse Adventure? 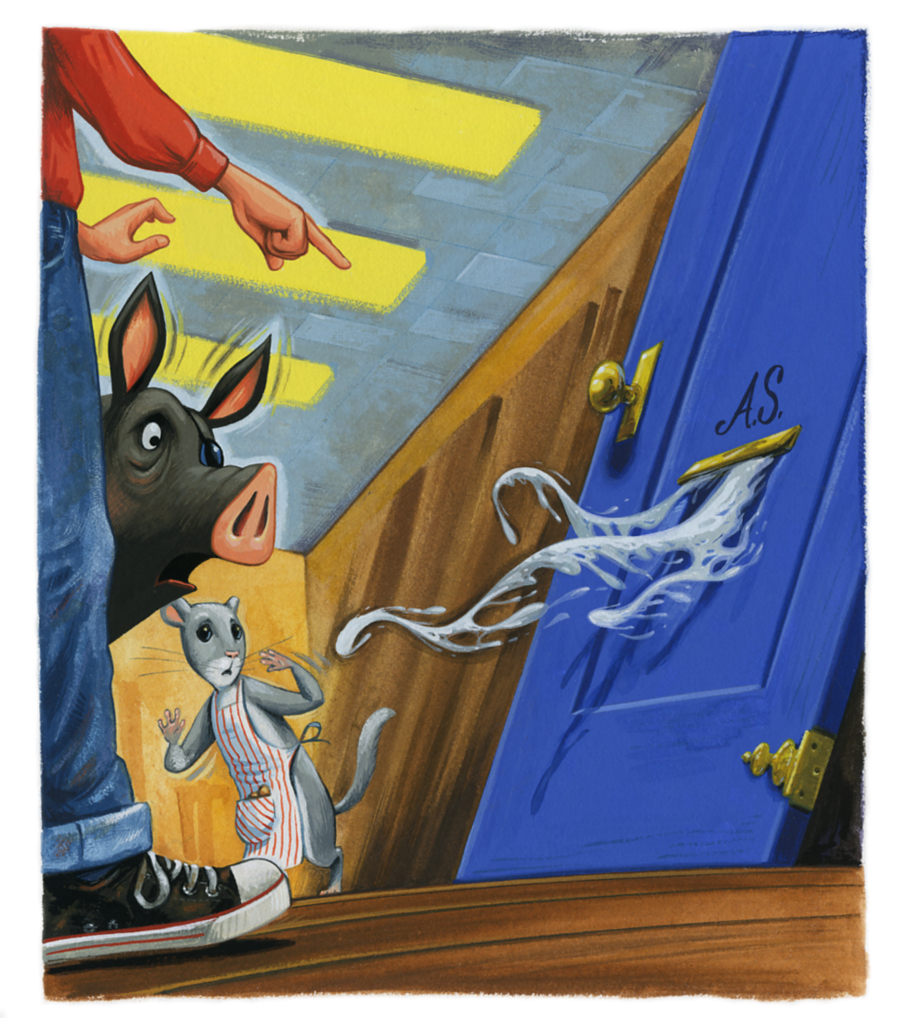