“Wolf at the Door”
by Megan McDonald, illustrated by James Ransome

The disembodied voice seemed to come from nowhere and everywhere – ricocheting off rocks, echoing through trees, speaking out of thin air. But try as they might, Nancy and Joe could not lay eyes on the Being that belonged to the spooky words that had just rasped, “What have you got there?”

“Who are you?” Nancy asked, speaking to the air. She trembled; her fingers let go of the robotic arm. It dropped to her feet.

Gravett, Emily. Wolves. 40p. Gr. 1-3.
A tender rabbit takes a trip to the public library, and happens upon a book about wolves. Wolves, you say. Rather a dangerous topic for a tender rabbit, perhaps? Never fear. It’s only a book, and we mustn’t confuse a story with reality. That would just be silly…

Kasza, Keiko. The Wolf’s Chicken Stew. 32p. Gr. PreK-3.
The Big Bad Wolf himself is scouring the forest for his dinner. He is just about to pounce on a chicken, when he decides to fatten her up, for an even better meal. For the next few days he deposits scrumptious desserts at her door, but discovers, too late, that hers is not the only mouth to feed. He may not have dinner, but he has 100 new friends!

Trivizas, Eugene, illustrated by Helen Oxenbury. The Three Little Wolves and the Big Bad Pig. 32p. Gr. PreK-3.
In this fun and fanciful twist on the old favorite, three little wolves barricade their homes against the big bad pig with fortress-like properties. When his escalating attacks trump their tactics, they try something completely different, and weave a peaceful house of flowers.

Aiken, Joan. The Wolves of Willoughby Chase. 168. Gr. 3-7.
Bonnie and Sylvia worry about the ferocity of the legendary wolves that roam the woods around Willoughby Chase, but it is the nefarious motives of the evil Miss Slighcarp, their temporary Guardian, and her designs on the family fortune, that represent the real danger. With the help of Simon, the half-wild goose boy, they embark on a plan to foil their foe, and find Bonnie’s parents.

Lyons, Jayne, illustrated by Victor Rivas. 100% Wolf. 256p. Gr. 4-6.
Ten-year-old Freddy Lupin anxiously awaits his “transwolfation,” when he can claim his place among the respected wolves of his lineage, and escape the control of his uncle Sir Hotspur and his home at Farfang Castle. When he becomes a tiny poodle, instead of a great wolf, Freddy must rely on his smarts, and not his strength, to outrun a werewolf hunter and join a band of homeless dogs with ideas of their own.

Wood, Maryrose. The Incorrigible Children of Ashton Place: The Mysterious Howling. 288p. Gr. 4-6.
When Penelope Lumley, 15–year-old recent graduate of the Swanburne Academy for Poor Bright Females, assumes responsibility for the children of Ashton Place, she is met with three children raised by wolves in the woods of the Estate. Can instruction in poetry and Latin overcome their feral tendencies, and even if it does, will that be enough?

Some say that riddles began in ancient times and were mainly about the sun, the moon, the rainbow, and the wind. Riddles were taken very seriously back in the days of the Greeks. Homer, a great Greek philosopher, is said to have died of humiliation because he couldn’t answer a riddle!

In the Middle Ages, riddles were considered a form of entertainment associated with the bards. The format of riddles facilitated their job as traveling entertainers. Riddles were also a sort of trivia, passing information between people that others could not understand, comparable to “undercover information.”

Episode 10 includes this riddle, “Thirty white horses upon a red hill. Now they champ, now they tramp, now they stand still.” Nancy and Joe venture several guesses before exclaiming the correct answer. Did you know the answer to the riddle? Have you heard or read this riddle before? Here’s a hint: it comes from a “somewhat” famous book by a writer named J.R.R. Tolkien!

Can you guess the answers to these other riddles from the same book:

Riddle #2
What has roots as nobody sees,
Is taller than trees
Up, up it goes,
And yet never grows?

Riddle #3
Alive without breath,
As cold as death;
Never thirsty, ever drinking,
All in mail never clinking

Riddle #4
A box without hinges, key or lid,
Yet golden treasure inside is hid.

Riddle #5
It cannot be seen, cannot be felt,
Cannot be heard, cannot be smelt.
It lies behind stars and under hills,
And empty holes it fills.
It comes first and follows after,
Ends life, kills laughter.

Figuring out the answers to riddles can be a lot of fun. It is also fun to create riddles of your own!

How to Write a Riddle

What do you call a kitten drinking lemonade? (a sour puss)

What flower do you always wear? (two lips)

Now it’s your turn! Based on any of the episodes you have read so far, what riddles might you write that could be entertaining or be designed to pass on information in an undercover fashion?

Answers to Riddles: 1-Time, 2-Mountain, 3-Fish, 4-Egg, 5-Darkness. The “somewhat” famous book in which these riddles appear is The Hobbit!

The following two web pages, which are no longer online, were used as references for this section:

In their respective illustrations for Episodes 9 and 10 of The Exquisite Corpse Adventure, both Chris Van Dusen and James Ransome have skillfully contrasted light and dark values in their paintings creating drama and depth. Taking advantage of the opportunity to compare and contrast their work, I have created one Talk Art! section that discusses both illustrations and includes coordinating art activities: “Shading and Modeling with Light and Dark” and “Arranging and Drawing a Still Life.”

Click here to visit the Talk Art! section for both Episodes 9 and 10.

Following their confrontation with the Wolf, Nancy and Joe are confronted with another crisis when they realize they have lost both Baby Max and the key given to them by Angel. Joe protests immediately when Nancy suggests they must split up. The twins have never been apart, and they can hardly stand the thought of it. It is the red arrows—each pointing in a different direction—that convince the two that going separate ways is the right decision. What do you think about Nancy and Joe’s decision to separate? Can you think of an alternative? What do you think will happen next? Have you read any other stories in which siblings were forced to separate? What were the circumstances…and the consequences?

Have you ever been forced to say goodbye to someone you care about? How did you feel? Were you as lonely as Nancy and Joe seem to feel?

Imagine you were a witness to the parting of Nancy and Joe and you can choose to join one of them as they leave each other. What would you say? Think about the conversation you might have…and write it down as a duologue. Who would you choose to talk to? Nancy or Joe? Would you find one to be easier to talk to? Write down your conversation, and be sure to specify who says what. You might also want to include “stage directions” in parentheses to indicate the action that is taking place. For example, your duologue might start like this:

(Joe begins to walk more quickly toward the water, though his head hangs low. I approach from the side.)

Joe: Who are YOU? Where did you come from?!

Me: Errrr…Hi. I was hanging out at the other end of the beach with my family. We heard something loud––like an explosion—and I ran up the beach to see what it was. Are you ok? Is that your sister? (Points to Nancy, who is walking the other way.) 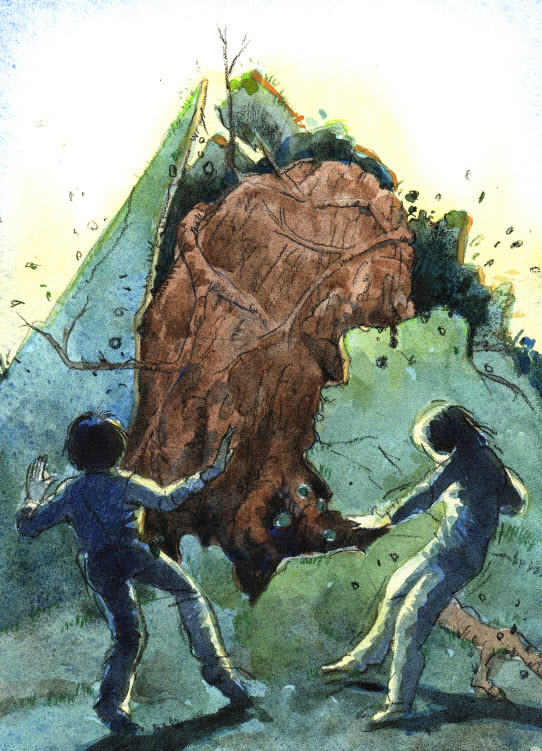