In 1976, Parents of New York United, a conservative community group demanded that a number of books be pulled from school library shelves. Those books were:

The Fixer by Bernard Malamud

The Naked Ape by Desmond Morris

Down These Mean Streets by Piri Thomas

A Hero Ain’t Nothin’ but a Sandwich by Alice Childress

Soul on Ice by Eldridge Cleaver

A Reader for Writers edited by Jerome Walter Archer

The Island Tree School Board agreed with the group’s complaint and found the books objectionable. Many of the school board members’ determinations were made after reviewing only portions of the books. The books were removed from the shelves. In defending its actions the board called the books, “anti-American, anti-Christian, anti-Semitic, and just plain filthy.” Seventeen-year-old Steven Pico and four other teens, fourteen to sixteen, challenged the school board’s decision, taking the case all the way to the Supreme Court.

The teens won. According to legal expert Claire Mullally, “The Court recognized that the First Amendment rights of students are “directly and sharply implicated’ when a book is removed from a school library. Therefore, the discretion of school boards to remove books from school libraries is limited. The law requires that if a book is to be removed, an inquiry must be made as to the motivation and intention of the party calling for its removal. If the party’s intention is to deny students’ access to ideas with which the party disagrees, it is a violation of the First Amendment.”

For more information about this First Amendment Supreme Court Decision:

Read author Chris Crutcher’s discussion of the case in his article “Five Teens Win the Right to Read” on his website ChrisCrutcher.com. Crutcher also includes a list of great web links for teens concerning the case and the First Amendment.

Check out the extensive list of research articles regarding freedom of speech on the First Amendment Center website. 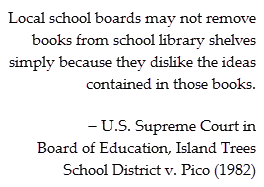