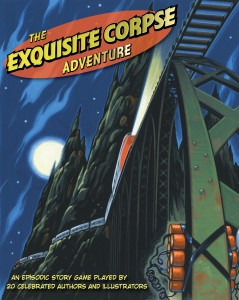 “First run in installments on the Web, the pro bono project shifts tone and atmosphere with the author, from Lemony Snicket to Natalie Babbitt, from Linda Sue Park to Nikki Grimes, from Jon Scieszka to Jack Gantos—and who would have guessed that Katherine Paterson would be such a dab hand at egg puns?—but never goes off on self-indulgent tangents.” – Kirkus Reviews

For well over a decade, the NCBLA and the Center for the Book in the Library of Congress have worked together in an innovative partnership.  When Dr. John Cole, the founding director of the Center for the Book, invited the NCBLA to help create a national literacy project for young people as part of its new Read.gov website launch, the NCBLA leaped at the opportunity. The Exquisite Corpse Adventure is the lively result!

Originally published on the Library of Congress’ Read.gov website, The Exquisite Corpse Adventure is a buoyant, spontaneous experiment; a progressive story game just like the one many families play on road trips and at home when there is a power outage and kids play at camps and parties. It is a game in which one person begins a story, stops at a cliff-hanging moment, and the next person picks it up and continues until everyone in the group has the opportunity to contribute. And just as in those games, the contributors to The Exquisite Corpse Adventure invented characters that spontaneously erupted out of their imagination; plot lines that tumbled forth, some realized, some lost; and conflicts with no logical solution in sight.

Published by Candlewick Press in August 2011, The Exquisite Corpse Adventure is available in paperback and hardcover. It is also available on audio. Ask for it at a library and bookstore near you!

“This book is about two kids from the circus whose parents are in another dimension. Only one thing can open the door between their two dimensions: the exquisite corpse. If you really want to know, the exquisite corpse is a robot – not a key. This book was awesome because each chapter had a different style of writing – like that game where one person starts a story and the next person continues it. I liked all of the chapters because the whole story continues a basic idea, yet it’s kind of random. It’s fun to figure out where the authors are leading you. On a scale of one to 10, I give The Exquisite Corpse an 11.” – By Ty (8, almost 9) Cambridge, Massachusetts 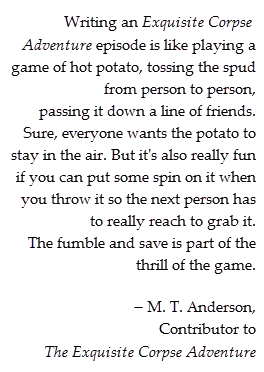