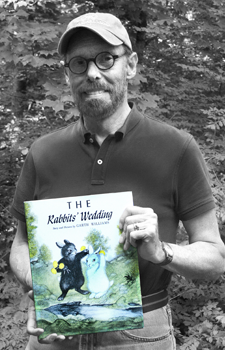 Illustrator and author Wendell Minor recommends The Rabbits’ Wedding, written and illustrated by Garth Williams. “I have always admired Garth Williams’ sense of craft and draftsmanship in creating animal characters for his many children’s books. The Rabbits’ Wedding was a controversial book at the time of its publication in 1958. The wedding of black and white rabbits was interpreted by Alabama libraries as approving of racial integration and interracial marriage. This was six years before the Civil Rights Act of 1964. It’s difficult to believe that such a perception of Williams’ book would be possible from today’s perspective. Garth Williams is best known for his illustrations for Stuart Little, Charlotte’s Web, and the Little House series.”

The Rabbits’ Wedding (HarperCollins, 1958) is recommended for ages 4-8.