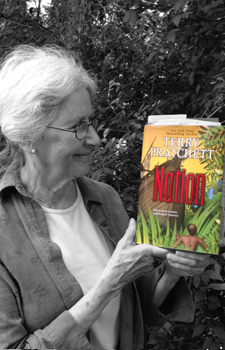 Author Virginia Euwer Wolff recommends Nation by Terry Pratchett. “Why do I love Nation by the late Terry Pratchett? After a gigantic storm at sea in a sort of parallel nineteenth century, the two stunned survivors are Mau, an island boy, and Daphne, a shipwrecked girl in way too many petticoats. First they must invent a common language and learn how to make fire. Then they must figure out how to lead a nation that neither of them could have imagined. Their marvelous survival story is earthy, hilarious, and profound. As Mau and Daphne learn to think outside the box, their endlessly inventive author pays almost giddy attention to the fact that the box is always there. I laugh, cry, and wonder through this compelling novel.”