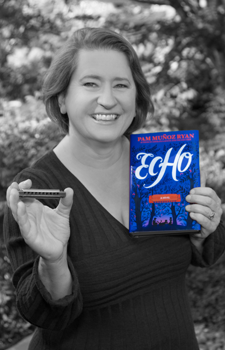 Author Rosanne Parry recommends Echo, written by Pam Munoz Ryan and illustrated by Dinara Mertalipova.  “This book weaves together three childhoods touched by war and aided by an enchanted harmonica, blending meticulously researched historical fiction with elements of the fantastic. I loved its artistry and it’s heart. When my husband went to war in Iraq 25 years ago, he took a Marine Band Honer harmonica with him and left behind this much smaller harmonica for me and our newborn daughter. He returned from Desert Storm safe and sound a year later, and we’ve had a house full of music makers ever since.”