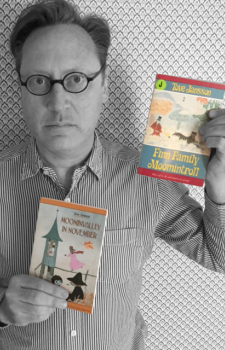 Author M. T. Anderson recommends the Moomintroll series by Tove Jansson. “Tove Jansson’s Moomintroll novels grew with me as a kid, from the early adventurous romps to the later, more melancholic books (like Moomintroll in November). These are stories of comfortable but yearning little creatures thrown into uncomfortable and bizarre situations on some hidden, magical Finnish fjord. Comets threaten—floods change the landscape—a miraculous hat changes all who wear it—underground rivers sparkle with rubies. With her loving but still sometimes fraught Moomin family, Jansson created a cast that, as in the Peanuts or other ensemble-cast dramas, seems to speak to different sides of our personalities. We all know these characters because they’re aspects of ourselves. I read the first books when I was seven, but even now, I see people and think that they’re a Snufkin, or a Moominpapa, or a Fillyjonk. Ignore the Hello Kitty-style merchandizing hype that has grown up around these characters in the last decade. The tales themselves are incredibly personal, tender, funny, eccentric, moving, and exciting.”

The Moomintroll series (Farrar, Straus and Giroux), including Finn Family Moomintroll and Moominvalley in November, are recommended for ages 9-12.

Be sure to check out Anderson’s books Symphony for the City of the Dead: Dmitri Shostakovich and the Siege of Leningrad (Candlewick, 2015), Feed (Candlewick, 2002), and Whales on Stilts (Harcourt, 2005).