“The Beast Pit”
by Shannon Hale, illustrated by Calef Brown

Without hesitation, Joe performed a backflip off the tree branch. While he was still mid-air, Nancy tossed baby Max in a graceful arc (he weighed about the same as the watermelons they used back in the circus). Joe landed on the forest floor, his arms outstretched, and the baby plopped safely in his hands, while Nancy leapt after them hands-first, finishing off with a cartwheel. She bowed automatically before remembering there would be no applause in this villain-infested woods – only certain death.

Ehlert, Lois. Red Leaf, Yellow Leaf. 40p. Gr. PreK-3.
Swirling, autumnal oranges and reds, and crisp, fresh yellows and greens combine in breathtaking collages to tell the story of a sugar maple tree, from seed to stature. Ehlert tells a simple story, complimenting the straightforward narrative with scientific details about the tree itself, as well as the plant- and wildlife sharing its branches and shade.

Locker, Thomas, with Candace Christiansen. Sky Tree: Seeing Science Through Art. 40p. Gr. K-4.
Locker and Christiansen have created a seamless amalgam of art and science as beautiful as it interesting. Working on a number of levels, a series of images of the same tree, from the same vantage point, progresses through the seasons, illuminating both the natural changes that transpire and the artistic principles involved in painting the story.

de Fombelle, Timothee. Toby Alone. 400p. Gr. 3-6.
Translated from the French, de Fomblelle’s fantastical novel follows young, tiny (one-and-a-half millimeters tall) Toby Lolness as he is exiled to the lower branches of the Tree his family has inhabited his whole life. Ecological resonances add depth to an already gripping and inventive story of one boy’s commitment and resilience.

Choldenko, Gennifer. If a Tree Falls at Lunch Period. 224p. Gr. 4-8.
Kristen is beginning seventh grade with an extra 30 pounds, and a household in turmoil. Walk is beginning as the only black student at the prestigious (read snobby) Mountain School. Brianna Hanna-Hines is the most-popular girl in school, and wields her popularity like a chain-saw. Told in alternating voices, this story of drama and reconciliation is poignantly told and powerfully affecting.

Episode 7 of The Exquisite Corpse Adventure introduces the reader to a couple of robust scientific words: clone and DNA. DNA (deoxyribonucleic acid) is the genetic fingerprint of life. This robust word lends itself to several word study and word play activities.

According to Donald R. Bear of Words Their Way, the purpose of Word Study is to examine words in order to reveal consistencies within our written language system and to help students master the recognition, spelling, and meaning of specific words. Word study allows students opportunities to discover the beauty of words, to think critically, and to have fun at the same time.

Little Words from Big Words is an engaging activity that builds vocabulary and gives practice in creative thinking. Take a “big word” like deoxyribonucleic acid (DNA). Find as many “little words” or “hidden” words within this big word as possible.

Little Words from Big Words allows a variety of ways to analyze, investigate, manipulate, and create lists and categories of “hidden” words. Individuals or pairs can search for words, in general, or they can be directed to search for specific word patterns. For example, an obvious word that “jumps out” at you is acid. However, if searching for a hidden word that follows the CVC (consonant-vowel-consonant) pattern one might choose lid.

Rules of the Game

According to Donald M. Bear, sorting is a powerful way to help students make sense of words. When students sort words, they are engaged in the active process of searching, comparing, contrasting, and analyzing. Two approaches to word sorts are teacher-directed and student-created activities. Words can also be sorted by sound, pattern, or meaning.

Student/pairs conduct Open Sorts to find as many “hidden” words as possible. Students create their own categories for sets of words.

Here are a few websites that have excellent vocabulary enrichment activities:

The Art Form of Silhouettes

And just where was Genius Kelly? Nancy was turning to look when a shadowy figure dropped out of a tree, moonlight glinting on her long knife.

The twins veered away, but another shadowy figure appeared, and another, until Joe, Nancy, and baby were encircled by dozens of men and women in frighteningly black garb, all with moon-licked daggers, all smiling in a supremely villainous manner. The smiles gave Joe the creeps. Nancy didn’t notice the smiles, being suitably creeped-out by the daggers. But Baby Max was enchanted by the glinting of moonlight. It made the daggers look wet and sweet.
— From Episode 7: “The Beast Pit” by Shannon Hale

Shadowy figures abound in prose and Calef Brown employs a wry silhouette twist in his illustration for Episode 7 by Shannon Hale. Looming over our heroes Joe and Nancy, Baby Max, and their perceived foe turned friend Genius Kelly, bold villains foreshadow both danger and raucous adventure, their gestures and facial expressions a wily wrought combination of wickedness and humor. Like the Post-Impressionist artist and illustrator Henri de Toulouse-Lautrec, Calef Brown uses flat graphic space, a limited palette, strong diagonals, and “the silhouette” to capture and intrigue viewers.

A traditional silhouette is a shadow-cast profile cut from dark paper. The word silhouette, the name of this inexpensive form of portraiture, comes from a French finance minister’s surname, one Etienne Silhouette, a miserly unpopular character who worked for Louis XV, failed miserably and retired early to his estate at Brie sur Marne, where he supposedly spent endless hours, scissors in hand, snipping away at black paper. I often wonder when I hear these pat little stories—what if the man’s name had been Blout or Greenfunghulis or Flounder would this graceful, practical, and flexible art form still have been named after the guy?

A silhouette can be a cut paper portrait, but it can also be any cut shape on dark paper fixed upon a light background. It can also be a drawn or painted outline or shape seen against a light background, or an outline or a drawing filled in with solid color against a light background. Silhouettes and shadow art exist in many world culture traditions from ancient Chinese shadow puppetry, to late 19th century Parisian Impressionist and Post-Impressionist theater and graphic art, to the contemporary art scene where artists use the silhouette to comment provocatively on world and national issues.

Henri de Toulouse-Lautrec, like Calef Brown, used the silhouette often in his illustrations, sometimes in solid form, sometimes as a mere outline, but always to dramatic effect. Following are samples of Toulouse-Lautrec’s poster art: 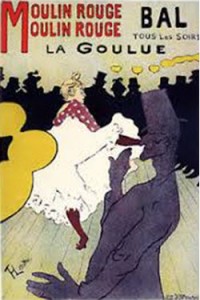 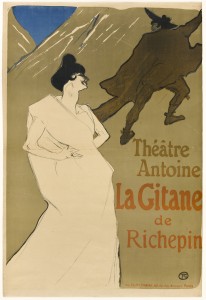 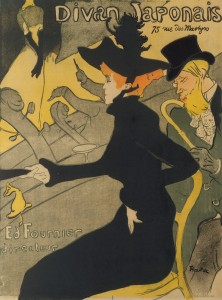 Toulouse-Lautrec would have been very familiar with the silhouette art form; by the late 19th century it was a well established medium. And as a frequent customer at Le Chat Noir, a cabaret in the Montmartre district in Paris, he would have seen, and possibly found inspiration from, its avant-garde shadow puppet theater. Over 43 shadow theater plays were produced by artist and craftsman Henri Rivi’re at Le Chat Noir. For the production of the Temptation of Saint Anthony, Rivi’re designed over 40 visually sophisticated scenes filled with silhouette forms of animals, people, and landscape shapes cut from zinc. The silhouette puppets were backlit behind a screen and manipulated by hand. 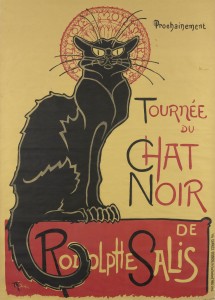 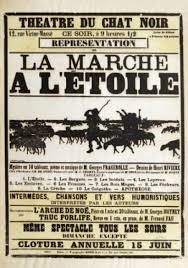 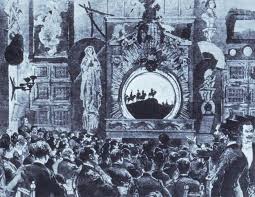 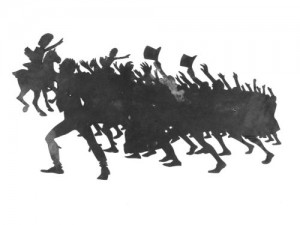 Like Calef Brown, contemporary fine artists are putting their own “twists” on the traditional silhouette form. British artists Tim Noble and Sue Webster project light against assemblages they have constructed from junk and nature, creating intriguing wall images.

Artist Kara Walker uses the traditional art of silhouette to create larger installations that comment provocatively about racism, the history of slavery, and other social issues. 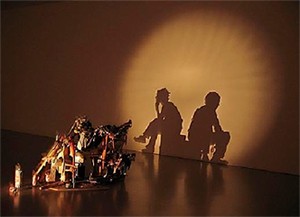 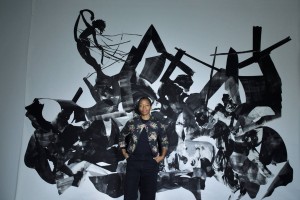 And share with your kids and teens the silhouette inspired film credits for Lemony Snicket’s film A Series of Unfortunate Events (below). The credit art was designed by Jamie Caliri and produced by Axiom Design and MWP/Caliri Productions. My house is overflowing with visual artists and we really liked the movie, but we loved the film credits. The film’s credits will inspire your kids, too! Watch the film title and credit video.

As a family or class, research the artist Henri de Toulouse-Lautrec; concentrate on his poster work. I recommend that you familiarize yourself with his work first—there are scores of books about Toulouse-Lautrec and his work, as well as multiple Internet sites—and choose to share age appropriate information and art examples for some of his work is inspired by the adult Parisian night life of the 19th and early 20th century.

Have your kids compare and contrast Calef Brown’s illustration with the examples, above, of Toulouse-Lautrec’s poster work.

Have your kids and teens create their own shadow play for one or all of the episodes in The Exquisite Corpse Adventure. You can give people specific tasks to create one big production—assign each person or persons the task of being playwright, director, set designer, silhouette puppet designers and creators, etc.—or you can break the larger group into smaller teams and have each team write and create their own individual productions for various episodes.

You can find many books about shadow puppet plays at your library. Here are some websites that may prove helpful, too:

The first paragraph in Episode 7 describes the current setting as “villain-infested woods.” How does the setting affect the story? If the woods had not been described as “villain infested,” do you think a forest setting would still affect the feeling and tone of the story? How so? Does the forest setting facilitate the action in this episode? For example, would it be possible for this episode to take place in a desert, on a beach, or on a wide-open plain? Can you think of other stories in which the action takes place in a forest? Is the forest typically a setting in which good or bad things happen or both? Cite examples from stories you know.

In Episode 6 Boppo the clown announces that “…these woods are infested with all kinds of bad guys, and the leader of them is Leonardo Dubenski.” But Nancy and Joe—and we the readers—do not meet Leonardo until Episode 7. What do you think of this character? How did you react when you read his physical description? Joe giggles when he first sees Leonardo. Do you think he is funny, too? Or do you think he is scary or strange? Why? How would you compare Leonardo to Boppo?

Nancy has been consistently described as “moral” in the previous episodes. Can you point out ways that she exhibits her moral character in this episode?

Genius Kelly explains to the twins that the red arrows on their little toes and his hoof might be used like compass points to direct them to the scattered pieces of the Exquisite Corpse. How is that possible? Would you consider the arrows to be some sort of magical ability? Do any of the other characters have a magical ability? Do you think the arrows will help guide Nancy and Joe to the missing pieces of the Exquisite Corpse? Or do you think the arrows might be leading them somewhere else? Can you think of another magical ability that might serve Nancy and Joe well on this quest?

Like most of the previous episodes, Episode 7 ends as a cliffhanger. (A cliffhanger is “a work issued in installments that end at a point of great suspense.”) How is this cliffhanger ending different than the previous episodes? How does it make you feel? What do you think will happen next? What can Nancy and Joe do to help themselves? Write your own version of Episode 8 and decide for yourself what happens next to Nancy, Joe, Baby Max, and Genius Kelly. Or, take turns ending the story out loud! Let each young person add another sentence—or two—until the group agrees that the story has come to a satisfying conclusion. 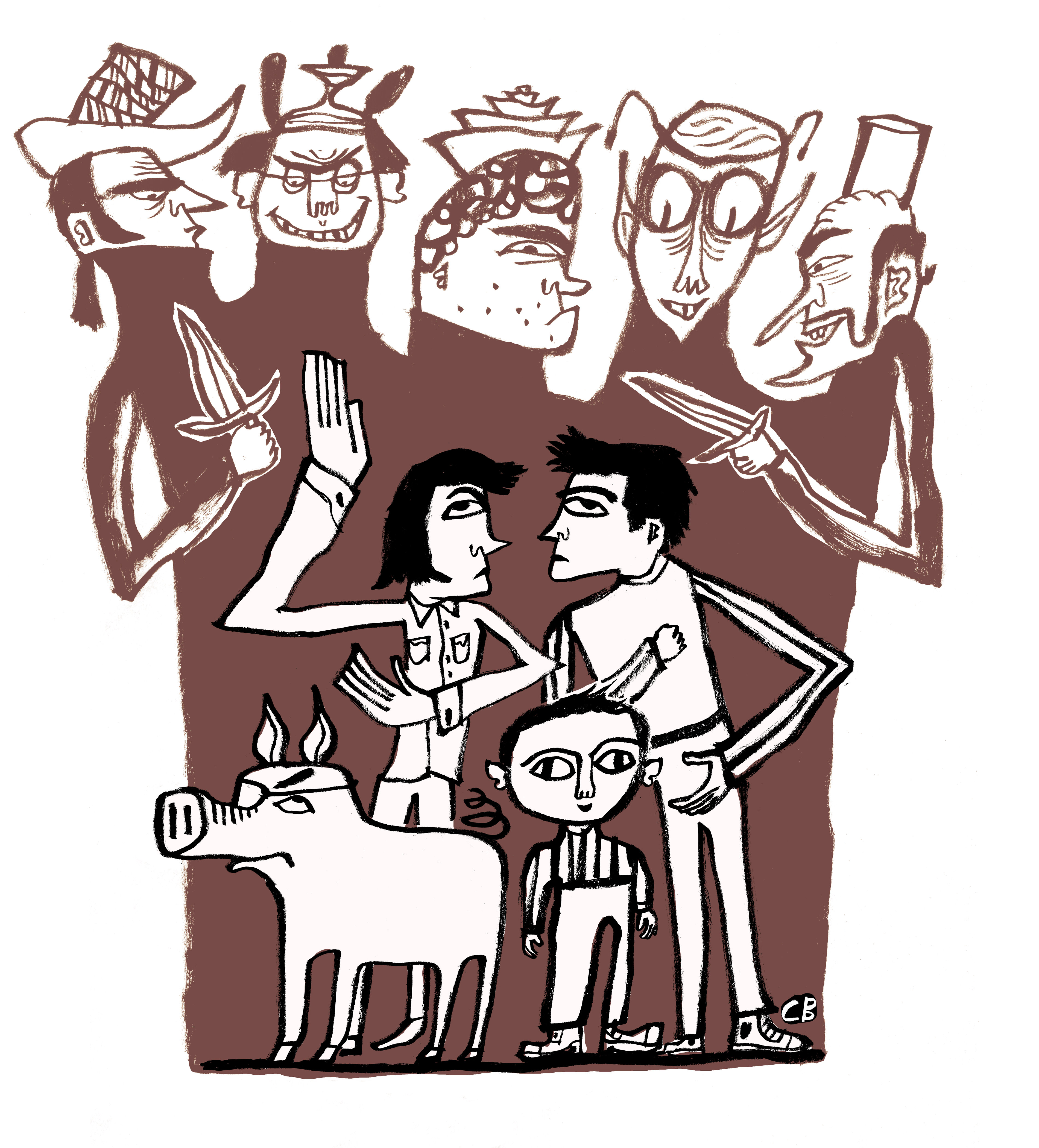