“Hold everything,” said Boppo. Everyone obeyed as much as possible. Joe held the birthday card with their parents’ urgent cry for help. Nancy held the bull-whip in readiness. The baby held the last note in the “Star Wars” theme song. Einstein held his breath.

Lee, Hyun Young. Something For School. 32p. Gr. K-3.
Dismayed because people mistake her for a boy on the first day of kindergarten, Yoon borrows her sister’s headband the next day. But what’ll happen when Sister reclaims the headband? To Yoon’s relief, her classmates don’t even mention her gender–they just want her to play. The illustrations for this Korean import, showing round-faced kindergartners, make it easy to empathize with Yoon. (Horn Book, Spring 2009)

Newman, Jeff. Hippo! No, Rhino! 32p. Gr. K-3.
When a clueless zookeeper puts the wrong sign in front of Rhino’s enclosure, the temperamental creature can’t stand to be mistaken for a hippo. The minimal text is related through signs and speech balloons, but it is Newman’s offbeat, color-mad illustrations, in a retro style reminiscent of Roger Duvoisin, that tell the story. Different typefaces, colors, and other graphic elements gleefully signal mood and build tension. (Horn Book starred, Spring 2007)

Dadey, Debbie. Cherokee Sister. 119p. Gr. 3-6.
With her tanned skin, twelve-year-old Allie could be a Cherokee, like her best friend, Leaf. When soldiers force Leaf and her family from their Georgia home, Allie is also taken and shares the horrors of what became known as the Trail of Tears. While the girls’ eventual rescue by Allie’s father strains credulity, young fans of historical fiction will enjoy this story of friendship. (Horn Book, Spring 2001)

Lawrence, Caroline. The Fugitive from Corinth. 198p. Gr. 5-8.
This tenth Roman Mystery takes young amateur sleuth Flavia and her three companions abroad to Greece, where they seek to discover why their beloved tutor, Aristo, appears to have stabbed Flavia’s “Pater.” Though apparently setting up a love triangle and perhaps heading toward soap opera territory, the series nevertheless retains its trademark cliffhangers and authentic details of life in ancient times. (Horn Book, Spring 2007)

Ryan, Pam Munoz, drawings by Brian Selznick. Riding Freedom. 138p. Gr. 3-6.
Ryan draws on the true life story of Charlotte Parkhurst, who disguised herself as a boy at the age of 12 and ran away from a grim New Hampshire orphanage. [Charley] made a life for herself working with horses … out west, where she found her own place at last. Selznick’s full-page shaded pencil illustrations … express [Charley’s] yearning and loneliness as well as her deadpan mischief and her bond with the horses she loved. (excerpted from Booklist, January 1, 1998)

Some say that riddles began in ancient times and were mainly about the sun, the moon, the rainbow, and the wind. Riddles were taken very seriously back in the days of the Greeks. Homer, a great Greek philosopher is said to have died of humiliation because he couldn’t answer a riddle!

In the Middle Ages, riddles were considered a form of entertainment associated with the bards. The format of riddles facilitated their job as traveling entertainers.

Riddles were also a sort of trivia, passing information between people that others could not understand, comparable to “undercover information.”

Nobody really knows the exact history of the knock-knock joke. This type of joke, known world-wide, is corny and generally a play on words that doesn’t require a lot of thinking!

Episode 5 includes riddles and there is a knock-knock joke, too.

So, let’s work on creating some riddles and knock-knock jokes of your own.

How to Write a Riddle

What do you call a kitten drinking lemonade? (a sour puss)

What flower do you always wear? (two lips)

Now it’s your turn! Based on any of the episodes you have read so far, what riddles or knock-knock jokes might you write that could be entertaining or be designed to pass on information in an undercover fashion?

Content for this section was inspired by information in the knock-knock-joke.com and azkids.comnet.com websites, both of which have been closed.

Avid followers of The Exquisite Corpse Adventure may wonder why illustrator Chris Van Dusen chose to depict the “roller-skating baby” in his illustration for Gregory Maguire’s Episode 5 considering that Timothy Basil Ering featured that wily baby in the illustration he created for the previous episode.

The reason is simple. Chris Van Dusen, Timothy Ering, Calef Brown, and James Ransome are playing The Exquisite Corpse Adventure game the same way the Surrealists played “The Exquisite Corpse.” They create their illustrations “blind;” that is, they conceive and execute the illustration having no notion of what the other illustrators are doing!

The Exquisite Corpse Adventure illustrators read each episode thoroughly, but do not know how their colleagues are depicting characters, place, and time. This gives them total freedom and allows all of us to experience a wide variety of story interpretations and artistic styles.

A simple visual version of the game is to take a piece of paper and fold it width-wise into five equal sections. Only one section of the five should be seen at any given time. The first player draws the head of a person or animal, then folds the paper so that only the next section down is visible and the section with the head drawing is hidden within the folds. The next player draws the neck and shoulders; the next draws the torso; next the hips and upper legs, and finally the last player draws the lower legs and feet, all without viewing the drawings done previously. The climax of the game, at the end, is when the paper is unfolded in front of game participants revealing all parts of the group drawing as a composite “Exquisite Corpse!”

Conduct a discussion at home or in the classroom or library that allows young people to compare and contrast The Exquisite Corpse illustrations for Episodes 4 and 5. How are the illustrations similar? How are they different? Does each illustration reflect the authors’ writing styles in each episode?

You might also want to expand young people’s visual experience with book illustration further by comparing and contrasting the many visual interpretations of young people’s classic stories and tales.

Fun and Interesting Book Illustrations to Compare and Contrast

Compare James Marshall’s Little Red Riding Hood with Trina Schart Hyman’s version! Have two volunteers hold the books up side by side and compare the pages, page by page. 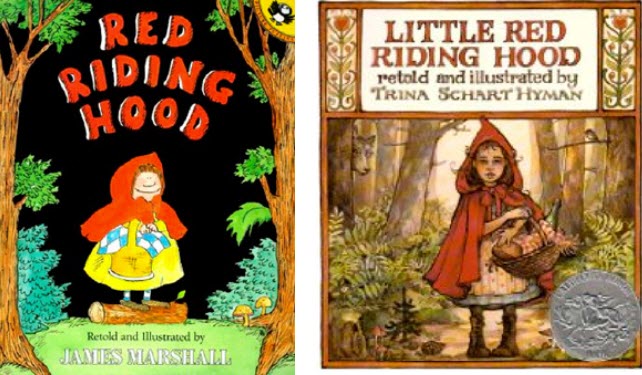 Ask your kids and teens—teens love to look at these books as much as younger kids do!—to compare and contrast the covers of the two books. Do the covers “foreshadow” or indicate the tone of the story, whether it will be a serious or humorous interpretation of the fairy tale? If yes, how has each illustrator designed the cover to indicate the tone he or she wants to establish for the book? Is the choice of font different as to its formality? How are the covers the same? Are the cover designs symmetrical or asymmetrical?

In the classroom, or at home, share a fairy tale with you kids. Read it aloud. In a classroom situation, you may want to pair off students and give each pair a different fairy or folk tale to read. It is important that the text version you share or read aloud should NOT have illustrations. Then ask your kids to create their own illustration of a particular scene in the story. In a classroom, since some students have an insecure tendency to copy others, it may help to separate students and situate them on opposite sides of the room so that they can concentrate on their own feelings and ideas related to the story.

Some children and teens—and adults for that matter—become intimidated when they are given a big sheet of white paper. Suggest to your kids that they doodle and loosely sketch ideas first on scrap paper, then move onto doing a few “thumbnail” sketches which show their ideas in more detail. Once they have gained confidence in their ideas, have them execute a “finished” illustration in full color on a good piece of white paper, in a size large enough to fit within the pages of a book either as a single page or double page spread.

When everyone has finished, have each pair of illustrators share their illustrations with the class. Perhaps the students can withhold the title of their story and their classmates can guess the story they have illustrated!

Make a list of all the characters Nancy and Joe have encountered since they left the circus. Have any of them helped Nancy and Joe? How? Which characters have hindered the twin’s progress? Would you consider any of these characters to be villains? Why or why not?

The pig Genius Kelly talks a lot in Episode 5! He even answers a number of Nancy and Joe’s questions…sort of. Some of what Genius says seems outlandish, prompting Joe to ask, “Is that true?” Read the episode and pay close attention to what Genius tells Nancy and Joe. What do you think is true and what is false? How can you tell? Does Genius provide Nancy and Joe with any useful information? What information does Genius give the twins that might help them to understand who they are and what they need to know for their quest?

Episode 5 ends with Genius revealing that Baby Max is Nancy and Joe’s father, Professor Alistair Sloppy. How did you react when you read that? What do you think of this revelation? Do you think Genius is telling the truth? Might it be possible for Baby Max to be the twin’s father? Imagine ways that could be possible.

Tell a story using the Exquisite Corpse method! Let someone in the room start, then take turns to let each person add to the story until it is complete or time runs out. Decide if each person can only state one sentence or talk as long as he or she prefers. 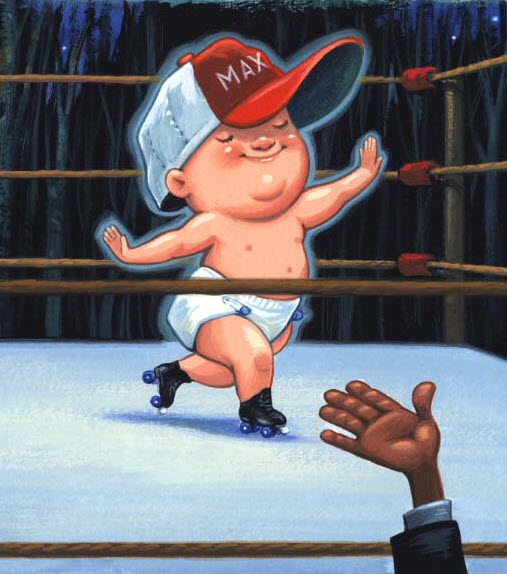