It was a pig. A very large, lean, elegant black pig with a white patch around one eye. He looked exceedingly dangerous. “I’ll take it now,” he said, and he held out his front hoof.

James, Simon. Baby Brains: The Smartest Baby in the Whole World. 32p. Gr. K-3
Mr. and Mrs. Brains do everything they can to foster the intelligence of their soon-to-be-son. And when he’s born, it becomes immediately apparent that he is “the smartest baby in the world.” In no time he’s fixing cars, performing surgery, and traveling to space. But Baby Brains is still a baby, and needs some time to grow up.

Wood, Audrey, illustrated by David Shannon. The Bunyans. 32p. Gr. K-4.
We’re all familiar with the legend of Paul Bunyan, but how many can tell the tale of his bigger-than-life wife, Carrie, and their predictably legendary children, Little Jean and Teeny. Wood and Shannon join forces to tell new stories of how these not-so-little rascals contributed to such American landmarks as Niagara Falls and Bryce Canyon.

Coloumbis, Audrey. Getting Near to Baby. 224p. Gr. 3-6.
Willa Jo and Little Sis have crawled out onto the roof of their Aunt Patty’s house, and won’t come in. In this aching, sorrowful, and ultimately uplifting story, two sisters face their grief at the death of their baby sister, find comfort in the trappings of family.

Fine, Anne, Flour Babies. 192p. Gr. 5-9.
The boys in room 8 at St Boniface school are known as “the sads and the bads,” a reputation earned through their reprobate antics. They choose for their class science project the great flour baby experiment, where each assumes responsibility for a six pound flour sack “baby,” as something of a joke, but at least one of them learns a lot about responsibility, and about himself, despite his best efforts.

Gaiman, Neil, illustrated by Dave McKean. The Graveyard Book. 320p. Gr. 4-8.
In the chilling opening scene of this 2009 Newbery-award-winning book, an 18 month old baby escapes the bloodthirsty pursuit of a villainous assassin, and toddles into a graveyard where he finds an assembly of ghosts who become his extended foster family.

People who make movies and TV shows often start by creating storyboards. Storyboards are a series of drawings that depict the sequence of scenes they want to film. The creators of movies and television shows often create storyboards to help them plan the stories and the camera shots they need to take.

You can also use storyboards to create visual depictions of texts. An important strategy for readers is to create a camera in the mind and then use storyboarding to transfer these images to paper. In this way, storyboarding can be used to help students sequence events, notice details, and increase their mindful reading.

Students can create a series of storyboards for each episode of The Exquisite Corpse Adventure. They can do this easily by folding a plain piece of paper into thirds or using separate pieces of paper or index cards. Have the students think of each section or piece of paper as a different camera “shot.” Ask them to consider the following questions as they create each storyboard:

This storyboard was adapted from the book: Golden, J. (2001) Reading in the Dark: Using Film as a Tool in the English Classroom. (p. 55). Urbana, IL: National Council for the Teachers of English.

Energy and Motion in Art

Electrifying is the word that describes Timothy Basil Ering’s illustration for Episode 4 of The Exquisite Corpse Adventure, “Dig That Pig” by Susan Cooper—and not because of the interesting gadget in the foreground! Mr. Ering imbued his illustration with a movement and energy that animates the page even though it is one single image. An interesting question to pose to the kids in your family, in your classroom, or library is—how did he create that energy?

Have your kids reread Episode 4 and ask them what impresses them about the episode. Does it contain lively or passive dialogue? Is it descriptive? Is it jam-packed with action? Is it a usual everyday scene or is it unusual, unexpected? Is there a lot or a little happening in this episode? Did Mr. Ering make interesting choices in his illustration that allow readers to visualize the scene? Does his illustration reflect the pace of the episode on an emotional level?

Ask young people which of the two illustrations emanates a sense of calm? A sense of electric excitement? Hopefully they will be aware that the Our White House illustration is far calmer than the Exquisite Corpse illustration, but see if you can lead the discussion to help them become more discriminating viewers or “readers” of the pictures by helping them discover the subtle nuances.

In Mr. Ering’s Our White House Civil War illustration, there is a strong horizontal movement to the design. Horizontal movements in pictures are usually more calming than vertical or diagonal designs (for related information and art exercise, see: “For Parents, Teachers, Librarians—Talk Art! Understanding Emotional Responses to Art”). From a composition and design perspective, how has Mr. Ering arranged the sleeping soldiers—are they sleeping, as many groups of people would, in a helter-skelter disarray around the room, or are the soldiers arranged in an orderly fashion? And is that grouping of soldiers reassuring or alarming? Is there anything disturbing in the illustration that is causing an underlying sense of subtle anxiety? The answer is, of course, the guns provide a disturbing element, but have the kids look at the guns as a design function. Are the guns a part of the strong horizontal movement in the illustration or are they disruptive to that movement? And where Mr. Ering has placed them on the picture is very important. They have been placed far right, almost off the edge of the painting. Would the emotional impact of the illustration have changed if Mr. Ering had put them in a more central position in his composition? If they were more prominent in the illustration, would the emotional impact of the illustration have changed? It might be interesting for young people to do a bit of detective work in the library and on the Internet—the Library of Congress website could be of great help—to see if they can find any actual civil war photographs, or perhaps historic newspaper illustrations, to see how much Mr. Ering’s design choices were shaped by historic visual references. Mr. Ering’s Our White House Civil War illustration is masterful in that yes, it emanates a sense of peace and calm, but one cannot help but feel an underlying sense of anxiety there, too, reminding us that in wartime, even the most usual everyday occurrences, like going to sleep at night, are fraught with deeper layers of fear and anxiety.

In The Exquisite Corpse Adventure illustration, the major movement in the illustration is circular, cyclonic in fact—that roller-skating baby is literally a whirling dervish! Have young people take a good look at Mr. Ering’s illustration, at his line, his brushwork, and at the texture of the painting. In many illustrations and paintings artists work to make their brush work smooth and seamless like a piece of glass, so that the viewer cannot distinguish one stroke of the brush from another. Mr. Ering does exactly the opposite in this illustration. His line and brushwork are highly apparent. Ask young people to describe to you how Mr. Ering uses line and brushwork to give the feeling of movement to his illustration. Ask someone to whirl around the classroom like a ballerina on point. Or watch a top as it spins across the table floor or desk. Do the lines and the shapes of objects blur when the object is spinning? Does his line and brushwork mimic the action of the whirling baby and the whip movement in the background of the illustration?

Have your students create their own “stop action” drawings by recording on uniformly sized paper all the various stages of a simple action. They can also make individual photographs of simple actions. These photographs and drawings can be made into flipper—or as they say in Great Britain—flicker books.

“Stop action” photography is a great way to introduce young people to film making because it is a form of animation that they can try out themselves with limited funds. Be forewarned, it does take an immense amount of time! Wallace and Gromit films, done in claymation, are stop action films that young people can mimic because modeling clay is a medium easily used and enjoyed by young and old alike.

Episode 4 begins with a pig…a talking pig! Have you ever read a book or story that featured a talking pig? Or other types of talking animals? Perhaps you might have read a book about a pig named Wilbur and a spider named Charlotte? (The book is Charlotte’s Web by E. B. White, of course.) Why do you think writers choose to let animals talk in their stories? What can we learn from stories that feature talking animals?

Can you think of other books you may have read that include talking animals? Do you enjoy these books? Talking animals are common characters in many works of fantasy fiction. Fantasy fiction is a broad category of fiction that is typically defined as a story “set wholly or in part in a vaguely medieval Arthurian or imaginary land populated by inhabitants subject to magic, as well as by magical figures, creatures, or beasts.” However, fantasy fiction also includes books that are categorized as animal fantasy. The subgenre animal fantasy includes not only Charlotte’s Web, but also such books as The Wind in the Willows by Kenneth Grahame, Babe: The Gallant Pig by Dick King-Smith, Brian Jacques’ Redwall series, and The Tale of Despereaux by Kate DiCamillo. Would you have thought that a book like Charlotte’s Web would be classified as fantasy? Why or why not?

Episode 4 also introduces a character named Albert Einstein. Did you know that there was a real scientist named Einstein? Find out something about him. How do you think he came to be in this story? Do you think Susan Cooper intends for him to be the “real” Einstein? If so, think of how that might be possible. A time warp perhaps?

What do you think about Max, the roller-skating baby? How did you react when you first read that passage? Can you imagine a baby roller skating? Would you consider Max to be a character of fantasy? Why or why not? Do you think Max will become important to the story? In what way?

Grab a writing partner and pen a tale by two! Let one person write a few sentences to start your tale, then hand the paper (or email or word processing file) to your partner to add to it. Pass your tale back and forth until one of you ends the story. 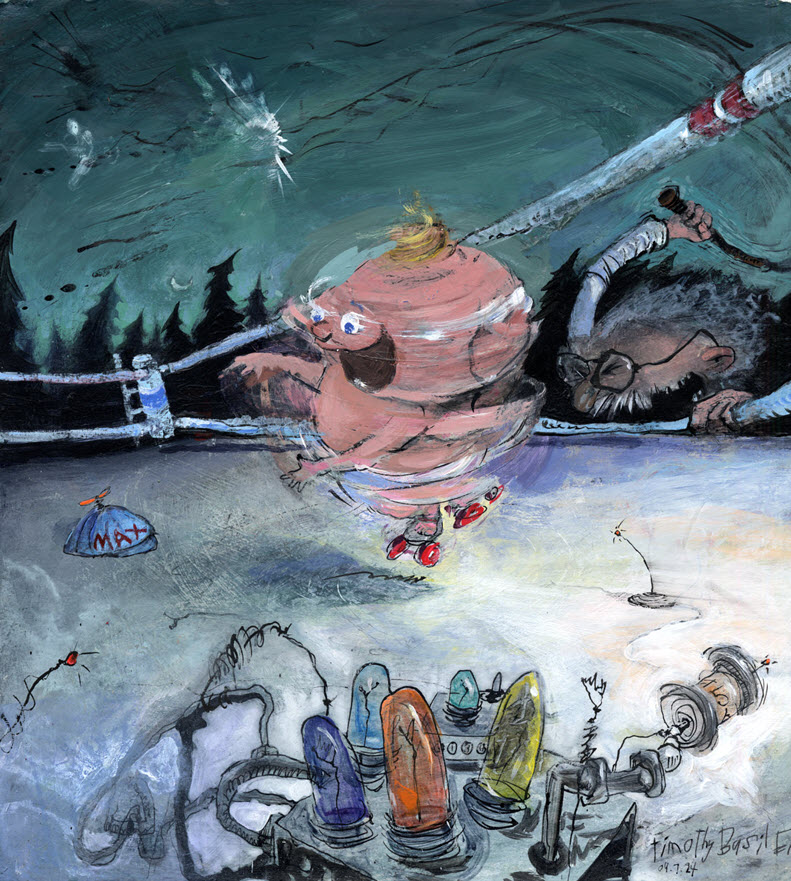