“The Found Clue”
by Kate DiCamillo, illustrated by Calef Brown

It was Boppo, of course. His hair was standing up on top of his head in a way that was not at all attractive. It made him look quite mad.

Martin, Jacqueline Briggs.  The Water Gift and the Pig of the Pig.  32p. Gr. K-3
Isabel and her grandfather the sea captain share a magical gift for finding things. Isabel is shy and when her best friend the Pig of the Pig goes missing she must awaken her courage to find her precious friend. Isabel soon learns that you must believe in a gift in order to make it your own. Linda Wingerter’s stunning illustrations take you to the coast with Isabel and her family.

Rylant, Cynthia.  Poppleton.  48p. Gr. 1-2
What would do if you had a friend who wanted to feed you oatmeal, toasted cheese and spaghetti all day long?  Even a pig knows when enough is enough. Poppleton learns that it is okay to tell a friend that you want to be alone. There is a new pig in town and his name is Poppleton.

Brooks, Walter R.  Freddy the Detective.  263p. Gr. 3 -5
There is a crime wave at Bean’s Farm and Jinx the cat’s name must be cleared. Freddy the pig, inspired by a Sherlock Holmes book he found in the barn, decides to become a master detective with the help of his sidekick Mrs. Wiggins the cow. Introduce yourself to Freddy, one of the first literary pigs.

Hearne, Betsy Gould.  Wishes, Kisses, and Pigs.  133p. Gr. 3-6
Eleven year old Louise Tolliver just made a wish on the first star of the night. Now her wish has come true but it is not what she expected. Her brother has disappeared and it looks as if he’s turned into a pig. Louise has to decide how to get him back using the only tricks she has, wishes, kisses and spells.

Zindel, Paul.  The Pigman.  166p. Gr. 6-9
Funny old Mr. Pignati has found some new friends. Lorraine and John are two bored teenagers who stumble upon the Pigman during a prank. Through his kindness the teens begin to enjoy a little bit of happiness. When their new friend puts his trust in them though, they betray him. Now the only way for John and Lorraine to find peace is to write down The Pigman’s story.

Episode 3 of The Exquisite Corpse Adventure introduces the reader to foreshadowing. “Foreshadowing” in a written work introduces hints and clues that tip the reader off as to what is to come later in the work.

Foreshadowing leads to making predictions about what might then occur.

Juggling?? Why might that not be a good idea? Joe and Nancy didn’t think it would be good for Boppo the Clown to juggle. Does this new wrinkle (and worry!) in the episode represent a clue of what is to come??

Log the events that foreshadow in on the chart below. (Go all the way back to Episode 1 and Episode 2 to check on whether there were clues that you could record in the chart below and then add those found in Episode 3. Keep filling in the chart as you continue to read the Episodes!) Then take a look at the Prediction Chart to see how accurate you are in following the clues to what will happen next! 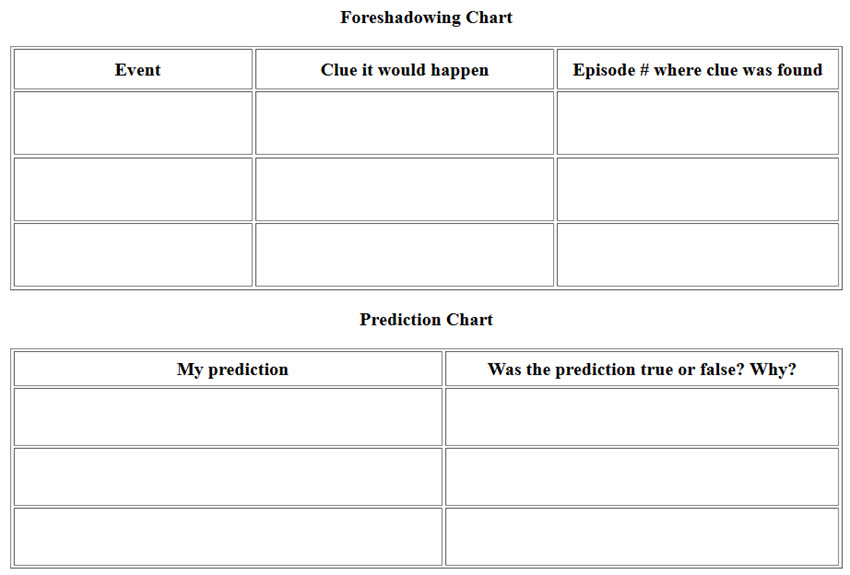 Some great picture books (for all ages) that demonstrate foreshadowing are:

The Artisitic Tradition of Clowns and Harlequins

“I‘ve always enjoyed illustrating loopy carnivalesque characters—my books are full of them—so an evil clown juggling meatballs and a bomb was very appealing, to say he least. Harlequin characters, as imagined by Picasso, Cezanne, Max Beckman and others are an influence, as well as kitsch paintings of sad clowns. For this piece I did a brush and ink drawing, scanned it into the computer and added color digitally. I love to incorporate pattern and a variety of line work, so the diamond and star shapes in the costume and the ruffled collar were fun to play around with. The tree shapes in the background are very simple, and lighter in tone than the black lines so not to compete with the figure of the clown. I also made them arrow-like to direct the eye upward. The clown’s arms, hands, and the arc of the juggled objects form a sort of frame around his face. To get the right demented expression, I made his features all slightly off kilter and non-symmetrical, hair standing on end. Evil, yes, but more than a little ridiculous as well.”
— Calef Brown, writing about his illustration for The Exquisite Corpse Adventure.

Clowns—whether they appear as circus personalities, carnival performers, or pop icons—hold a fascination for many people perhaps because in our own daily lives we feel we must walk out into the world and be a bit of a performer ourselves, our faces an outward mask of happiness even when we feel dark and depressed inside. Young people, too, may have mixed feelings about clowns. The performing clown hired to entertain at a child’s birthday party may come across as a scary figure to some of the children with unfolding laughter abruptly interrupted by fearful shrieks. 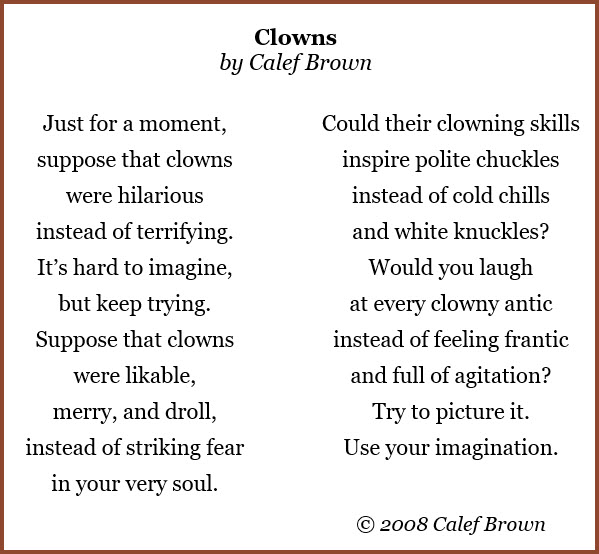 Artists have been fascinated by clowns—by harlequin and Pierrot figures; carnival, circus, and theater performers—for centuries, so much so that kitsch and parody clown art have become almost as collectable as fine art paintings of clowns. Some artists, like Picasso, feel that the harlequin figure acts as a visual metaphor of the artist as entertainer, a conception that has grown more popular in today’s post Andy Warhol fine art world and in the ever-expanding worlds of contemporary performance and video art.

When I opened up the graphic file to see what Calef Brown had created to illustrate The Exquisite Corpse Adventure Episode 3: “The Found Clue” by Kate DiCamillo, I was thrilled to see his bold graphic approach and immediately thought of the work of American printmaker and painter Ben Shahn and the expressionist clown paintings of Georges Rouault, and so many other artists.

Following are examples of great clowns created by artistic masters from around the world, which we hope will inspire the creative minds of the young people in your life. Works are arranged in alphabetical order by artist’s last name. Scroll down to see them all. You can click twice on each painting to see a larger image. 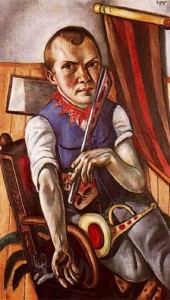 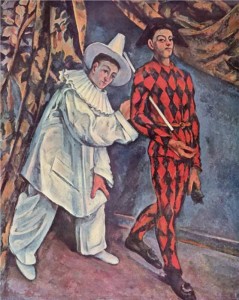 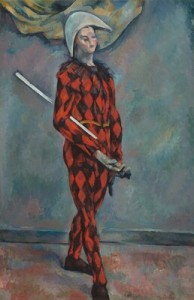 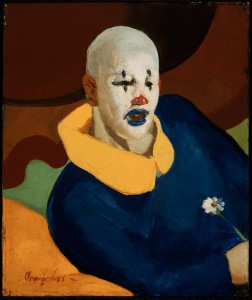 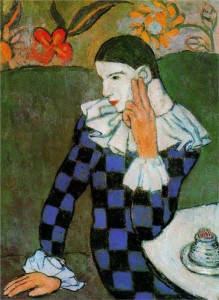 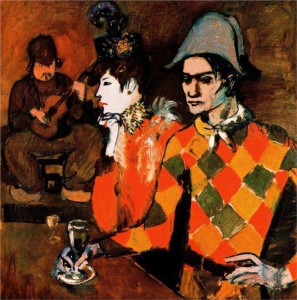 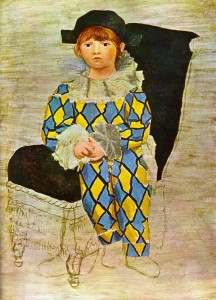 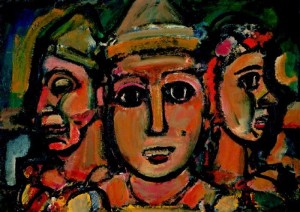 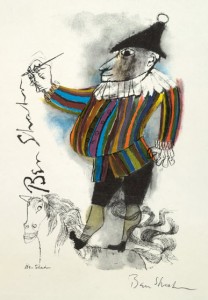 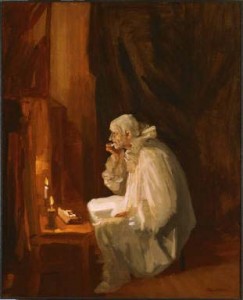 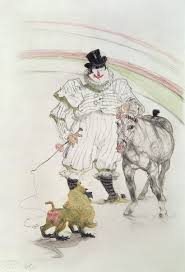 “At the Circus: Performing Horse and Monkey” © 1899 Henri de Toulousse-Lautrec

Materials you will need:

And make sure your kids work in an area that is spill proof—they will spill something and you getting upset about a mess will not make them feel great or inspire them to create art in the future––so assume the worst and be prepared!

There are some very interesting vocabulary words used in Episode 3; important in understanding the action that is occurring!

Boppo the Clown follows Joe and Nancy. “The stealth! The daring!” What does Nancy mean when she says that? 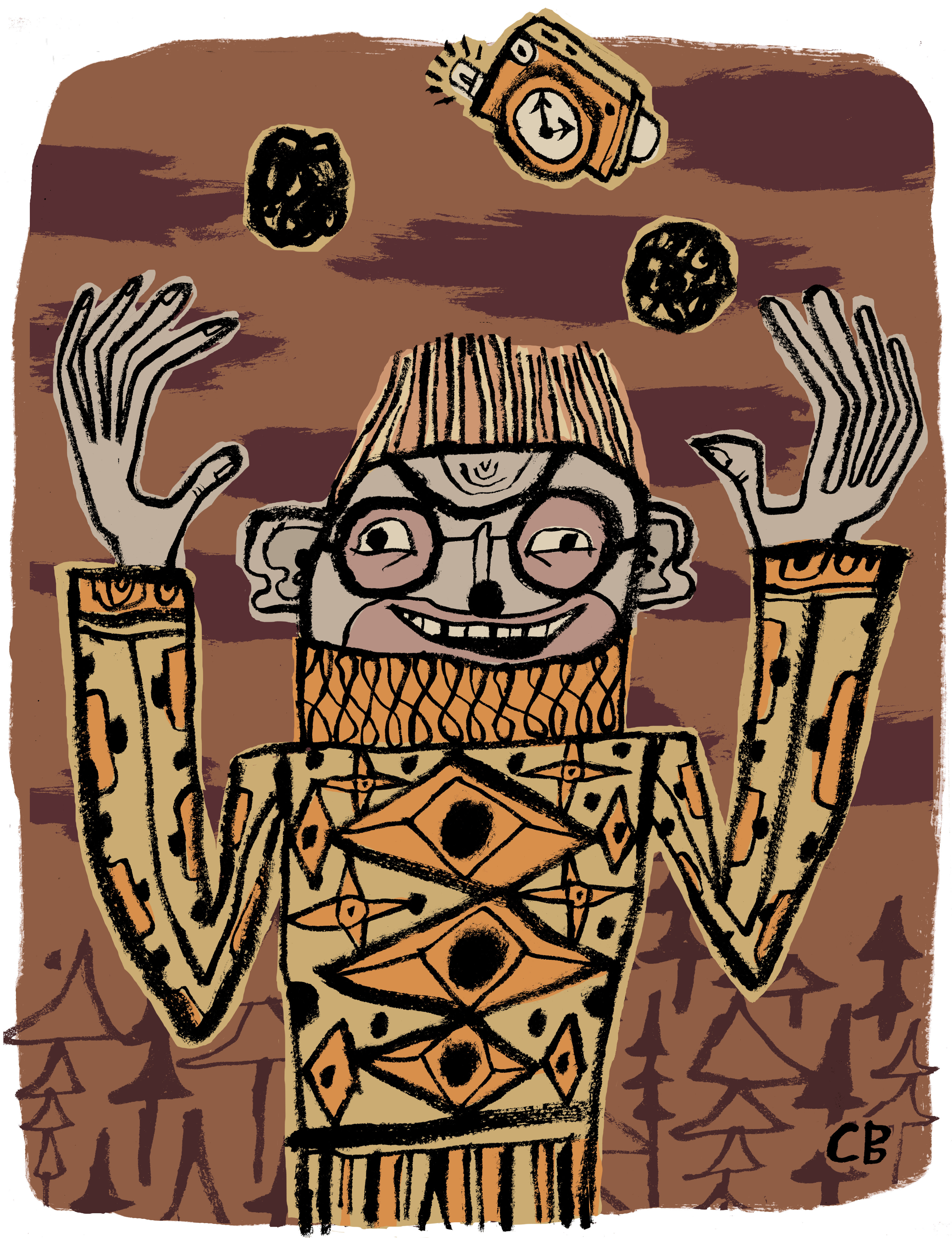