“When Is a Door Not a Door?”
by Natalie Babbitt, illustrated by Timothy Basil Ering

Nancy and Joe and Genius Kelly began their journey back to find a door, and as they picked their way along, Nancy told them more about her conversation with the wolves. “They’re very brave, you know,” she said, “and very strong and loving. Why, they claim that there’ve been times when wolf families have saved and raised human children from the time they were babies! They love families! That’s the way they hunt, mostly – mother, father, and pups, all together!”

Into the Woods! Annotated List of Suggested Read Alouds and Independent Reads

Browne, Anthony. Into the Forest.  32 p. Gr. 1 – 4.
A boy wakes up one morning to find his father inexplicably gone. To make matters worse, his grandmother is sick. With the weight of the world on his shoulders, the boy cuts through the forest to see his grandmother. On his journey he sees other children who’ve dealt famously with the deep dark woods – every journey anybody ever takes through the woods has these iconic children in it. A thought-provoking book with fascinating illustrations.

de Monfreid, Dorothée. Dark Night.  40 p. Gr. Preschool – 1,
What’s scarier than being on your own on a dark night? Being on your own with a wolf, a crocodile and a tiger in the vicinity! Felix, with his mop of black hair and bright red pajamas, is alone in the woods and grows more scared by the minute…until he finds a doorknob at the base of the tree he’s hiding behind. Can Felix somehow make his way out of the woods?

Sams, Carl R. and Jean Stoick. Stranger in the Woods:  A Photographic Fantasy.  46 p. Gr. Preschool – 3.
There’s a stranger in the woods – a snowman in the middle of winter, and none of the forest animals know quite what to make of him. Through incredible photography, we watch all different kinds of animals stare at the stranger, asking each other what they think. Finally, the least likely animal agrees to greet the stranger, who turns out to have a wonderful surprise for the animals of the forest!

Bauer, Marion Dane, illustrated by Leonid Gore. The Secret of the Painted House.  97 p. Gr. 2 – 4.
Emily is wandering in the woods behind her new house and finds a beautiful playhouse. The inside of it is painted like the forest itself, with another little playhouse on the walls, and there’s another inside of that one. A ghost girl lives in the painted walls, and she wants Emily and her little brother to stay forever. Emily must save them from staying trapped in the forest painting forever – but how?

Ferris, Jean. Once Upon a Marigold.  266 p. Gr. 5 – 10.
While out scavenging in the woods, Edric the Troll (call him Ed) finds a little boy named Christian, who refuses to go back home.Christian grows up in Ed’s cave, inventing brilliant things, and learning the forest around him. Years later, Christian sees Princess Marigold, and knows she is his destiny. Through a series of fairytale misadventures and triumphs, the two make their way toward happily ever after, with lots of comedy and heart.

Gerstein, Mordecai. The Old Country. 130 p. Gr. 4 – 8
Years ago back in the old country, Gisella goes into the forest to stop a fox that has been stealing her family’s chickens, and stares too long into the fox’s eyes. One, two, three, she and the fox have switched bodies! A war breaks out, and Gisella must find her family with the forest’s deep, strange magic helping her along the way. This incredible story will keep you racing to turn the pages!

Lead a discussion with young people by asking the following types of questions:

In this illustration for Episode 24, Timothy Basil Ering depicts Nancy in a charcoal drawing created on paper using an acrylic glaze. This illustration has a chalk-like quality.

To learn more about chalk drawings, refer to the Talk Art! article for Episode 19: “Chalk Art: In the Galleries and on the Streets.” This article discusses chalk drawings, includes examples of chalk drawings by other artists, and provides instructions for assisting kids in creating their own chalk drawings.

Natalie Babbitt introduces a new character in Episode 24, Doris the Dormouse. How would you describe her? What do you learn about Doris through her dialog and actions? Is she helpful to Nancy and Joe, or is she a hindrance? In what way? Mice are common characters in children’s literature. Can you think of any books that feature a mouse as the protagonist or a supporting character? Why do you think writers choose mice as characters?

This episode is overflowing with puns. A pun is “a play on words that capitalizes on a similarity of spelling and/or pronunciation between words that have different meanings.” Take another look at this episode and make a list of all the puns you can find. Compare your list with another student’s list. How are the puns used? For comic effect? To add a new layer of meaning? What makes each pun funny? Have you noticed other puns used in The Exquisite Corpse Adventure? Try writing a few puns yourself. You might want to start with a homonym. For example, one of the puns in this episode is based on the homonym pair “soul” and “sole.” Create a drawing or cartoon that depicts one of your favorite puns.

The setting in The Exquisite Corpse Adventure changes frequently. In Episode 24 once again we find Nancy, Joe, and Genius Kelly in the woods, but this time they are seeking a store. The trio is seeking the store because the wolves told Nancy they could find the door there that would help them find their parents. Would you expect to find a store in the middle of the woods? How does Babbitt describe the store? How is this store like—or not like—another one you may have visited? Doris says, “The store has been a great success, out here in the woods.” Can you think of stores that exist in isolated places? How can they be successful? Does Doris provide any clues as to why her isolated store is successful?

Only three more episodes remain in The Exquisite Corpse Adventure! Which one is your favorite so far? Was your favorite episode written by an author whose work you already knew…or by someone new to you? Have any of the episodes inspired you to read books by other authors? Or, has a particular episode inspired you to read a book in a new genre, such as fantasy or science fiction? Pick one or two or three of The Exquisite Corpse Adventure authors whose episodes you enjoyed and look them up. Find out what books they have written and check out one or two at your local library. 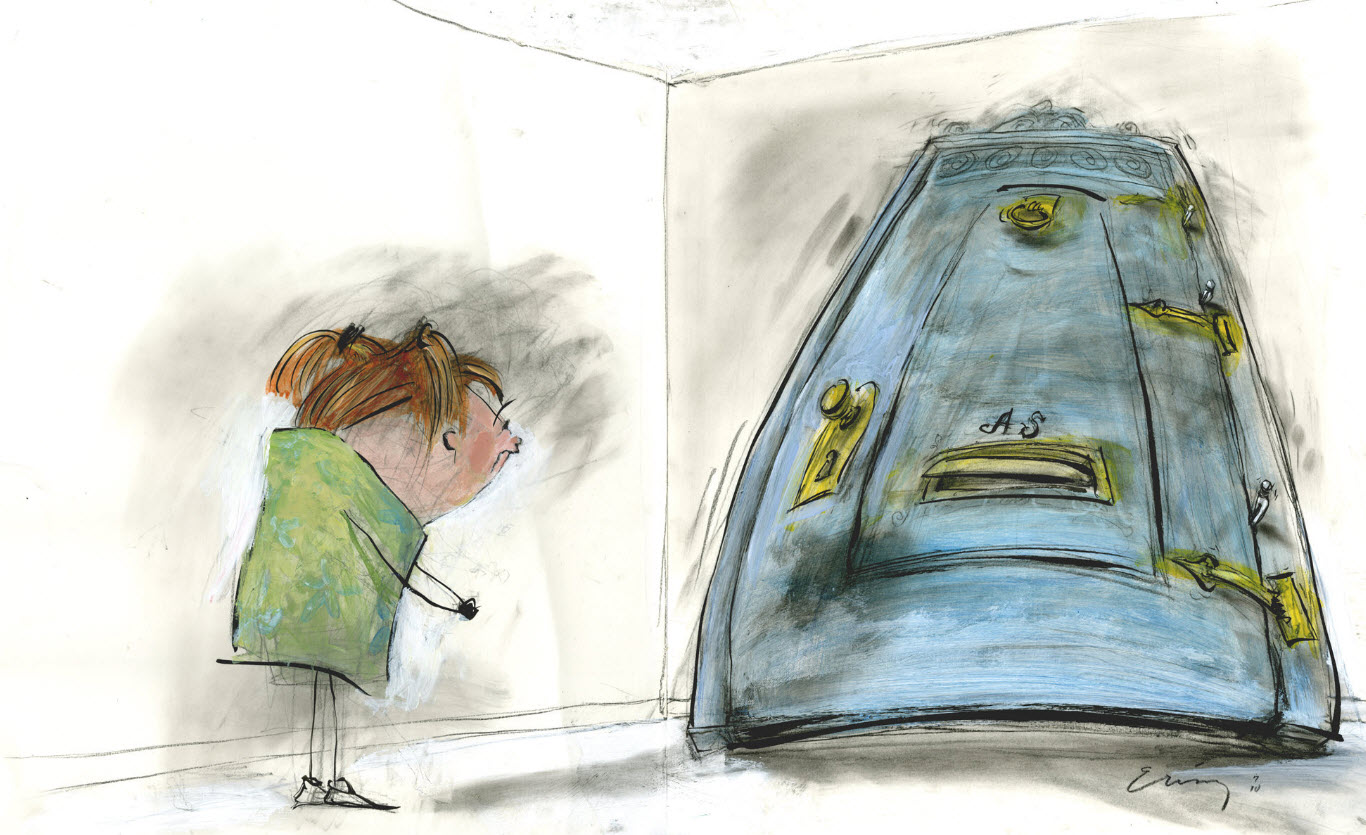