“Anything at All”
by Linda Sue Park, illustrated by Chris Van Dusen

The reunion was a joyful one, relief on all sides spilling over into elation.
“How did you find us so fast?” Joe exclaimed.
Raised eyebrows from Angel and Sybil; Genius Kelly would have raised his eyebrows, too, if he’d had any. He settled for a snort instead.
“Wasn’t all that fast,” Angel said. “I picked up the gang a while back, and we’ve been on the lookout for you ever since.”

Speed, Toby. Illustrated by Barry Root. Brave Potatoes. 32p. Gr. K-3.
“Death-defying spuds” star in this fun-filled adventure as the prize-winning potatoes of the county fair employ amazing skills previously unknown to the common tuber to save their veggie comrades from the chopping block of Hackemup the Chef.

Muth, Jon J. Stone Soup. 32p. Gr. K-4.
When three traveling monks are ignored by the cautious people of a remote village, the monks attempt to break the ice by showing the villagers how to make stone soup. As curiosity about the water and stone soup overpowers the villagers’ shyness, each comes out from hiding to make his or her own generous contribution to the rich soup and community gathering. Delicate watercolors add depth to this tale of generosity and friendship.

Yolen, Jane and Heidi E. Y. Stemple. Illustrated by Philippe Beha.
Fairy Tale Feasts: A Literacy Cookbook for Young Readers and Eaters. 197p. Gr. Pre-K-3.
In this delightful anthology, author Jane Yolen retells twenty beloved folk tales from around the world and her daughter Heidi Stemple provides an accompanying recipe for each. Look for “The Magic Pot of Porridge” accompanied by a recipe for Perfect Porridge in the breakfast section and “The Magic Pear Tree” with Magic Pear Crumble in the dessert section. Each fairy tale is fun to read aloud…perhaps while sampling the porridge?

Cook, Deanna. Kids’ Multicultural Cookbook: Food and Fun Around the World. 157p. Gr. 1-4.
Have you ever wondered what kids eat in Thailand or Tunisia…Panama or Peru? Discover easy-to-make recipes, facts, and activities for kids from countries around the globe in this international cookbook.

Dahl, Roald. Charlie and the Chocolate Factory. 160p. Gr. 4-7.
Taking a chance, the desperately hungry Charlie uses the small change he finds on the street to buy a chocolate bar, hoping it will contain the last golden ticket for entry to Willy Wonka’s Chocolate Factory. Luck smiles on Charlie and his wish is granted, beginning a wild journey through unbelievable delights (edible grass of minty sugar; everlasting gobstoppers; and toffee that grows hair!), but dangerous consequences to those who disobey the rules.

Kingfisher, Rupert. Illustrated by Sue Hellard. Madame Pamplemousse and Her Incredible Edibles. 138p. Gr. 3-7.
When a greedy uncle forces young Madeleine to steal a top-secret recipe from the mysterious shop of culinary genius Madame Pamplemousse, Madeleine discovers the “magical ingredients” that compose the recipe are not the exotic tidbits she expected while also learning something critical about herself.

A Response Journal is a written response to various genres: literature, poetry, mathematics, history, or geography. It has been described as a vehicle to provide a personal and meaningful connection to text in order to support retention. (Brozo, 1989) (Richek et al., 2002)

The purpose of student writing in this format is to engage in free writing and free expression as a response to text. Comprehension increases as a result of personalization of thoughts and ideas. A graphic organizer that includes the text on the left side of the page and a space for writing a response on the right side of the page can be very helpful.

Before Reading
Introduce the material to be read, such as one particular episode of The Exquisite Corpse Adventure. Good readers reflect on what they know and how information can personally affect them.

During Reading
Students read the selection and record their thoughts, feelings, opinions, questions, likes, or dislikes connected to the reading.

After Reading
Notes taken during reading can support students as they engage in class discussion and in their interpretation of facts, events, or ideas that were presented in the reading. 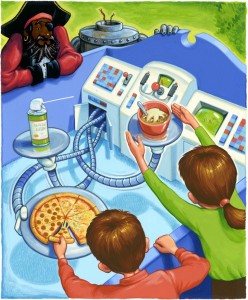 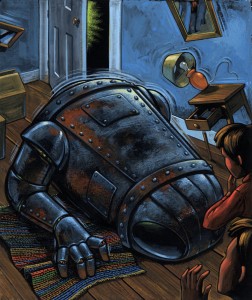 For more information about how Chris Van Dusen and other artists paint on different colored backgrounds, as well as two activities you can share with young people to guide them in creating their own small paintings and tonal pastel paintings, refer to the Talk Art! article for Episode 13.

When protagonists Nancy and Joe first embarked on this adventure in Episode 1, they left with not much more than the clothes on their backs. Finding food and drink has been exceedingly difficult as the twins travel through space and time. In Episode 21 Nancy and Joe are once again famished. Angel offers them “whatever” they want using the food replicator onboard the Cradle of Time. Not only can the twins choose anything, but Joe can hardly believe that no one is imposing any kind of limitations—they can eat whatever and as much as they both want. Nancy chooses oatmeal, and Joe chooses pizza. Are you surprised by their choices? Do Nancy and Joe overindulge? What do their choices and actions say about them?

If you could have access to a food replicator when you get home after school each day, would you choose something healthy? What would you ask for? If you had not eaten anything for days, do you think your choices would be different? Why?

Can you think of other stories in which hungry children are offered extreme amounts of food? Consider the Grimm’s fairy tale “Hansel and Gretel” and Roald Dahl’s Charlie and the Chocolate Factory. What happens when these children indulge? Are they able to fill their bellies and continue their adventures, or do they suffer some type of consequence?

As the episode nears its end, Nancy experiences a moment of sadness as she misses her parents. She wonders how she can miss something she’s “never really had.” Is it possible to miss someone or something you have not had? Can you think of a time when you have experienced something similar? 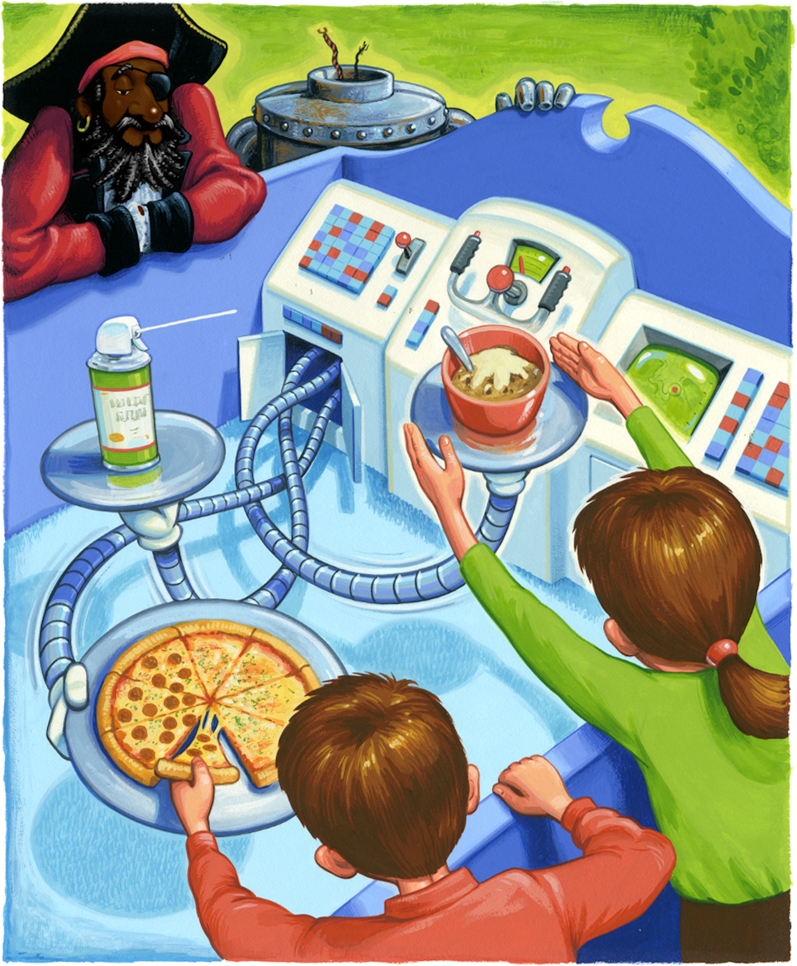