Joe, Nancy, and the fragmented robot, Roberta, pursued the pair of legs that fled through time, leaving their three friends to cope with the aliens who would soon be upon them. The friends were devoted to the Sloppy twins, and they were determined to help them to complete the assembly of Roberta, and to rescue their parents, and to find the home that they longed for, no matter what the consequences might prove to be. And they had said as much to Joe and Nancy! They had insisted that the twins should leave with Roberta at once and somehow intercept her legs as they sprinted past time zones, while the three of them remained behind to confront the aliens, battling them if necessary (as, most assuredly it would be), and stalling for time so that Nancy and Joe could make good their escape and accomplish their mission…

Bemelmans, Ludwig. Madeline’s Rescue. 50p. Gr. PreK-3.
In this Caldecott-winning classic, mischievous French girl Madeline falls into the Seine and is saved from a watery demise by a stray dog. Madeline adopts her hero, but when the school’s inspectors declare the dog’s presence unacceptable and kick him out, Madeline and her friends band together to return the dog’s favor and rescue their furry friend.

Blake, Robert J. Swift. 48p. Gr. K-3.
An adventurous father-son hunting trip in the Alaskan wilderness turns nightmare when a bear attacks and leaves Johnnie’s father severely injured. Confident in his son’s survival skills and their dog Swift’s instincts, Johnnie’s father sends the pair off on a mission to bring back help.

Levine, Ellen. Illustrated by Kadir Nelson. Henry’s Freedom Box. 40p. Gr. 2-5.
Based on a true story, this inspirational picture book tells how hard-working slave Henry “Box” Brown escapes to freedom in Philadelphia in a most innovative way—by shipping himself in a crate!

Barrie, J. M. Illustrated by F. D. Bedford. Peter Pan. 208p. Gr. 5 and up.
“All children, except one, grow up,” begins this classic childhood adventure in which the iconic Peter Pan, the magical boy who never grows up, invites not only Wendy and her brothers—but Barrie’s readers as well—to escape to Neverland, an enchanting land inhabited by young boys, pirates, Indians, and of course, Tinker Bell.

Fleischman, Sid. Escape! The Story of the Great Houdini. 224p. Gr. 4-8.
An engaging biography of the legendary magician and escape artist Harry Houdini, this book tells the story of the indomitable Houdini from his birth as Ehrich Weiss in a Budapest ghetto through his death.

Park, Linda Sue. A Long Walk to Water. 128p. Gr. 4-7.
Two interwoven stories of Sudanese children alternate to create one powerful whole: 11-year old Salva walks for years to escape the horrors of his war-ravaged homeland in Sudan and young Nya must walk eight hours every day just to fetch water for her family.

R.A.F.T .is a writing system that includes the following key ingredients:

R = ROLE of the writer. Decide who (or what) you will be. Will you be writing as Genius Kelly or Angel the Pirate? Will you be the Cradle of Time?
A = AUDIENCE of the writer. To whom are you writing? Are you writing to a specific person? To Congress? To a child?
F = FORMAT. What form will your writing take? Will you write a letter or a speech? Will it be an obituary, a conversation, a memo, a journal, or a diary?
T = TOPIC and STRONG VERB. What is your topic? What strong verb will help you present your topic?

The R.A.F.T. technique (Holston and Santa, 1985) allows students to incorporate writing into their reading. RAFT engages students because they write to an audience (other than their teacher), and they write for a specific purpose. This experience provides students with the opportunity to explain the topic clearly and completely.

Before reading an episode of The Exquisite Corpse Adventure (or any other text), introduce the material by previewing all topics, pictures, and questions. Brainstorm with students the many varied and possible “points of view” that could be used to relate opinions or feelings about the topic they are about to read.

During reading, students read the selection, keeping in mind the viewpoints that others (or objects) could possibly contribute on the subject.

After reading, explain that all writers need to consider four components of every composition: the role of the writer, the audience, the format, and the topic. Then, brainstorm additional ideas about the topics that came to mind during reading.

Have students choose one example from each category to incorporate into their writing about the topic.

This strategy is also useful (and effective) when incorporating writing into content area instruction. 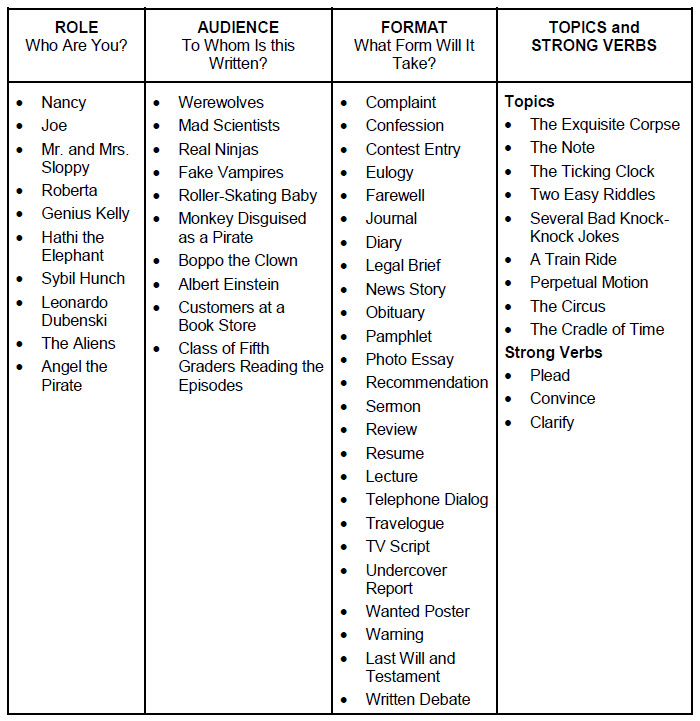 Download a PDF version of the R.A.F.T. graphic organizer.

Check out another version of the R.A.F.T activity in Episode 9.

Applications of Reading Strategies with the Classroom by Cecilia B. Frank, Janice M. Grossi, and Dorothy J. Stanfield (Pearson: 2006), pages 171-172.

Enjoying the spirit of the exquisite corpse game and process, Timothy Basil Ering chose to create his illustrations for The Exquisite Corpse Adventure using a variety of media and styles. For Episode 20, Tim created a black and white drawing of Angel the pirate.

For art activities that will excite young people about creating their own drawings, refer to the following Talk Art! articles:

How does Steven Kellogg reveal more about the personalities and character of the supporting cast in this episode? Does he do so directly, by telling the reader what each character thinks and does? Does he reveal character information indirectly, through their actions, dialog, and internal thoughts? Or, does the author reveal important character traits both directly and indirectly? Review the episode and cite examples of direct and indirect characterization.

Which of the three supporting characters do you consider to be the leader? Why?

What skills do Genius Kelly, Sybil Hunch, and Hathi each bring to the battle with the aliens? If you could choose one of these characters to fight alongside you in some type of confrontation, whom would you choose and why?

How does Steven Kellogg inject humor into the clash between the trio of friends and the aliens?

After Hathi attacks Leonardo Dubenski and Leonardo is taken away, the aliens change tactics and mobilize into “…a monstrous, murderous amoeba!” which restrains the three friends. They are saved, however, by Angel, who arrives in the Cradle of Time. Have you ever been in a frightening or tense situation when you wished someone would come out of nowhere and save you? Write a short paragraph describing the situation. You might choose to write it as a cliffhanger—and leave your reader wondering what happened—or you could choose to describe exactly how the situation ended. 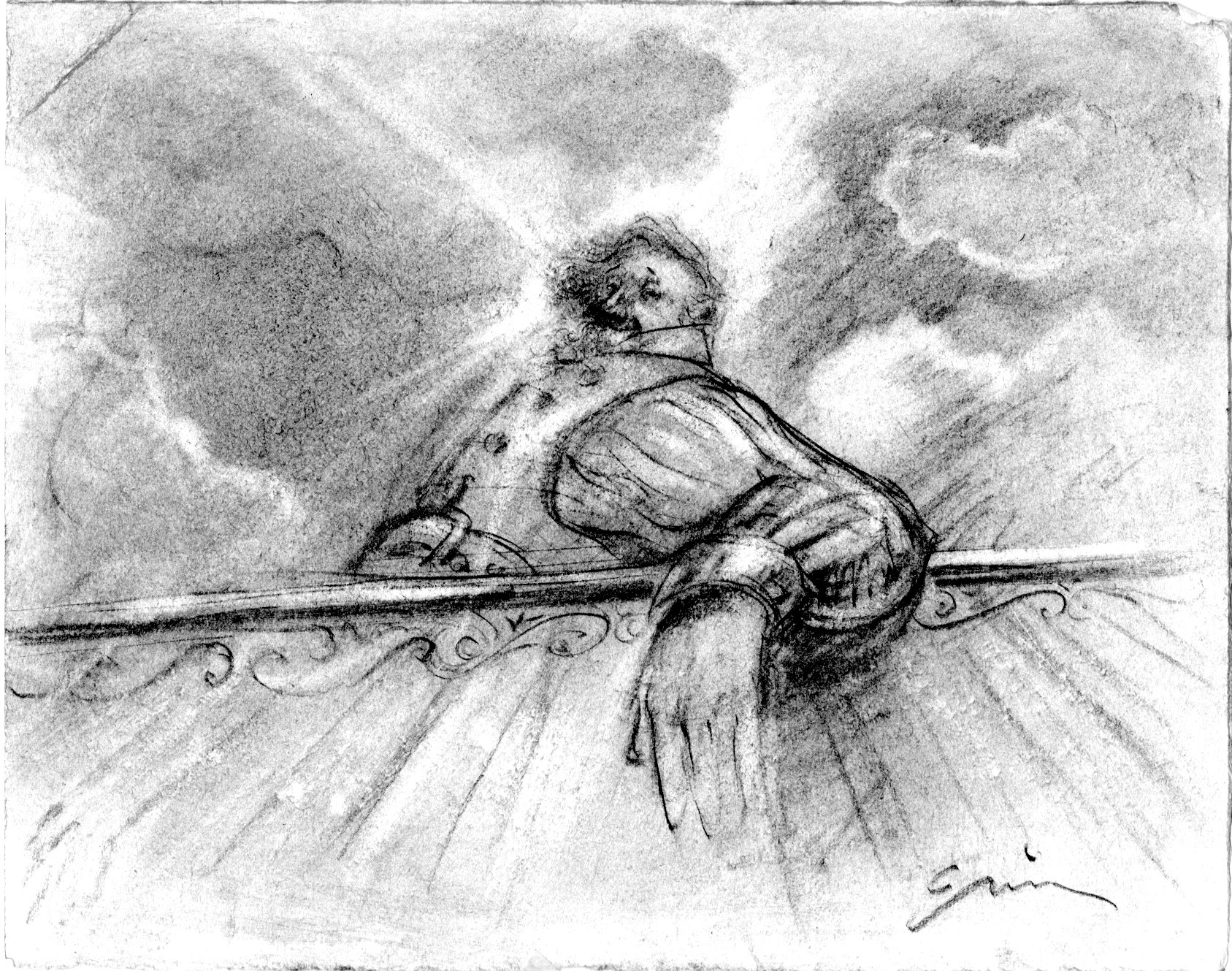