Nancy looked out at the huge shadow blotting out the golden light of sunset in the doorway, and felt cold with foreboding. What was it? She had to act without Joe, right this minute.

Beake, Leslie, illustrated by Karin Littlewood. Home Now. 32p. Gr. K-3.
Young Sieta dreams of the happy home she had before her parents died, before Aunty brought Sieta to her home now. On a school trip to the park for orphaned elephants, Sieta meets Satara, a baby elephant. See how Satara helps Sieta find happiness. Vibrant watercolors give life to the South African setting.

Côté, Geneviève. What Elephant? 32p. Gr. K-5.
No one believes poor George’s claims that a rather large elephant has taken up residence in his house, not even when they see the oversized pachyderm sunning in the flower garden. This romp reminds us – with whimsical color sketches – that seeing is believing!

Gorbachev, Valeri. Big Little Elephant. 32p. Gr. K-2.
What is Little Elephant to do when his new friends tell him he is too big to play their games? Why, they must all discover how fun it is to have friends of all sizes. Summer’s colors glow in the pen-and-ink and watercolor images of Little Elephant, Heron, Turtle, and Frogs.

DiCamillo, Kate, illustrated by Yoko Tanaka. The Magician’s Elephant. 201p. Gr. 4-6.
With a florit intended for bread ten-year-old orphan Peter seeks news of his sister from the fortuneteller, who tells him to follow the elephant. Elephant? Peter’s search for truth and belonging unfolds with lyrical narration and eerie black-and-white illustrations.

Fleischman, Sid, illustrated by Robert McGuire. The White Elephant. 95p. Gr. 3-6.
For allowing his aged elephant Walking Mountain to douse the prince, young mahout Run-Run must accept the prince’s gift of a rare and bothersome white elephant, Sahib. Readers will have fun with the humor of Run-Run’s plight, and solution, depicted in light prose and funny, full-page pencil sketches.

McCall Smith, Alexander, illustrated by LeUyen Pham. Akimbo and the Elephants. 68p. Gr. 3-6.
“Imagine living in the heart of Africa.” Ten-year-old Akimbo does, with his mother and with his father, who is the head ranger of the game preserve. Disturbed by the presence of ivory poachers and his father’s inability to catch them, Akimbo devises his own plan. Can he do what the adults cannot? The compelling story and exquisite black-and-white illustrations transport the reader to a land of tall grasses and Akimbo’s beloved elephants.

Episode 17 has definitive actions that move you as a reader from one point in the story to the next point…and so, what if we depict this episode in comic strip form, telling the story with pictures, sequentially arranged, using a traditional comic format? A traditional comic strip presents more pictures than words. The pictures are arranged sequentially, and when words appear they are presented in word balloons.

What would your choice of major events be within this episode that you would choose to draw? To begin, create an outline or list of the events, making sure that you have them arranged in order of what happened first, second, third, and so on. (You get the picture, right??)

Decide how many frames you will need to tell the story.

Add dialogue where you think it is most important for each character to speak, sharing his or her thoughts and feelings, moving the action from one frame to the next.

Did you know that the space between the boxes or frames in a comic strip is called a “gutter”? It is the space that comic artists leave so that your mind can move you, the reader, from one notion to the next, adding what you know so that you can guess, infer, or predict what will happen next!

Visit “Talk Art! The Artistic Tradition of the Gingerbread House” for a discussion of how the gingerbread house has been depicted not only in The Exquisite Corpse Adventure, but in other art and literature as well. This article also includes two complementary art activities.

The title is “the chief distinguishing name attached to any written production or performance.” Each of the authors who are writing episodes for The Exquisite Corpse Adventure provides a title for his or her episode. Story and book titles sometimes are very straightforward, but other times provide a can opener to other levels of meaning the author is trying to convey. Susan Cooper gave the title “Speak, Memory” to Episode 17. Does this title sound familiar to you? Did you know that this is also the title of a memoir written by a Russian novelist named Vladimir Nabokov? Can you guess why Cooper used this title? How does it suit this episode? Is there another reason Cooper chose this title? Hint: Take another look at Lemony Snicket’s Episode 12. The opening line of his episode is taken from Nabokov’s book. Do you think that quote inspired what Cooper chose to write for this episode? How so? (For information and questions about the usage of “exquisite corpse” in the story title, refer to the Discussion Questions for Episode 5.)

Boppo returns to his slumber after he unconsciously eats some gingerbread crumbs given to him by Roberta, which leads Roberta to say, “Hoist with his own petard.” Have you ever heard this proverbial phrase? If not, what do you think it means, based on what just occurred? What is a “petard?” If you don’t know, look it up! Also, do a bit more research and try to find out in which play Shakespeare used this same phrase. Can you think of other common phrases or expressions—even slang!—that communicate the same idea? Make a list, and compare it with others.

During the memory search performed by Sybil Hunch, the twins witness in the depths of the crystal ball “the monster morphing into the body of Boppo the Clown.” What do you think that means? Is Boppo from the other dimension? What other characters the twins have encountered do you think might be an alien or monster from the other dimension? Have you ever met someone who turned out not to be the person he or she had initially seemed to be? How were you able to reach this conclusion?

The episode ends with the group seeing a blaze of light ahead. When Nancy asks what it can be, Sybil replies, “I have no idea. Which is a very good sign.” Why is it a good sign that Sybil does not know what the light is? 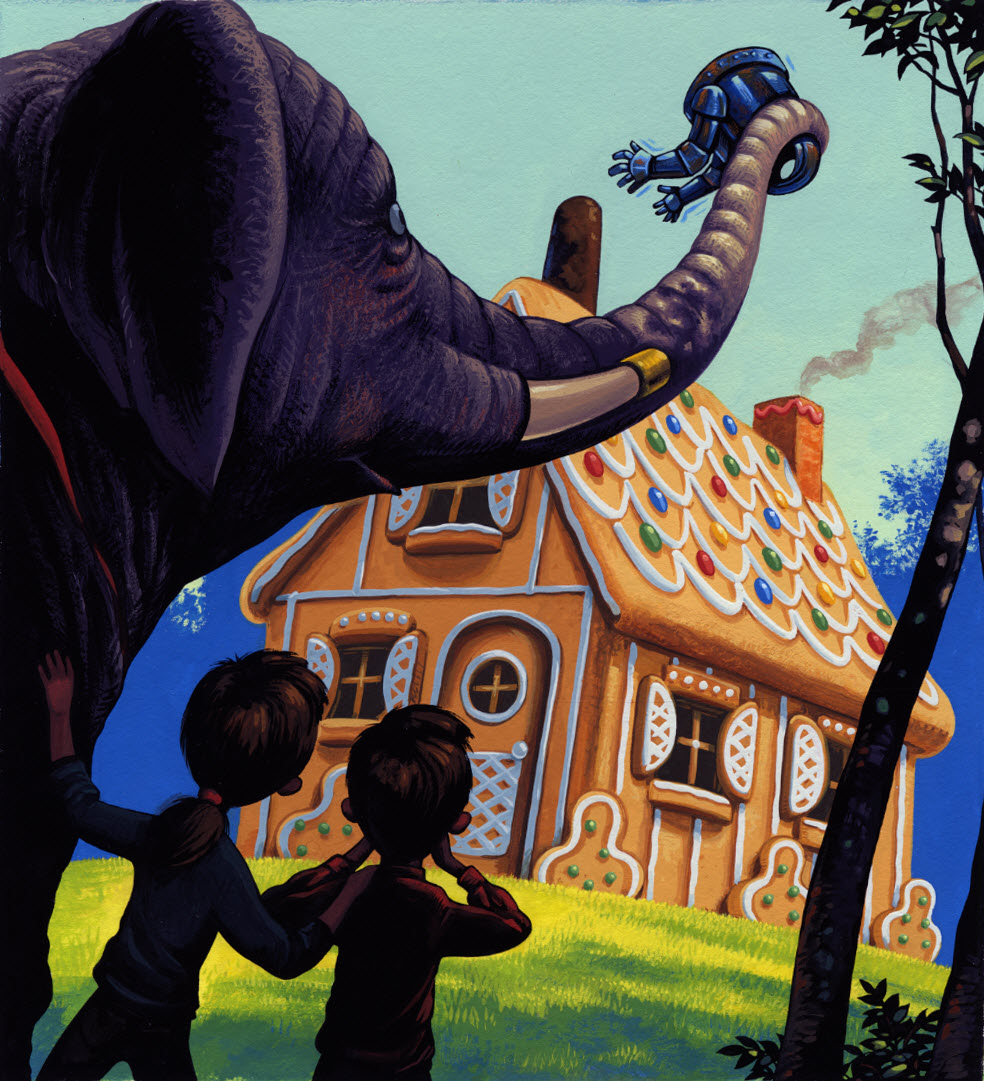