“If I Only Had a Leg”
by Kate DiCamillo, illustrated by Timothy Basil Ering

And surely it was Roberta’s leg. It must be. Because things always work out in the end, don’t they? Missing parts are found. Siblings are reunited. Parents return from another dimension. That’s how stories move along: from chaos to happily-ever-after. That’s the point of a story.

Allen, Debbie, illustrated by Kadir Nelson. Brothers of the Knight. 32p. Gr. K-4.
Narrated by the dog, Brothers of the Knight is a retelling of The Twelve Dancing Princesses set in Harlem. Reverend Knight has raised twelve boys who manage to mysteriously wear out their shoes every night (sneaking off to the Big Band Ballroom to dance till morning). The Reverend hires Sunday, an extraordinary woman, to uncover the truth. When the time comes for the boys to reveal the truth, the Reverend has a secret of his own.

Hale, Bruce, illustrated by Howard Fine. Snoring Beauty. 44p. Gr. 2-5.
When a cranky fairy is not invited to the christening of the new princess, she crashes the party and commands that the child will die under the wheels of a pie wagon. To counteract the spell, a hard- of- hearing fairy announces that instead of dying, the princess shall turn into a sleeping dragon (a snoring dragon, in fact), only to be awakened by a quince.

Hughes, Shirley. Ella’s Big Chance: a Jazz-Age Cinderella. 48p. Gr. PreK-3.
Hughes brings to life a Cinderella of the Jazz Age. Ella and her father’s happy lives and dress shop are turned upside down when Mr. Cinders decides to remarry. It is only Buttons, the shop helper, who can comfort Ella. Much of the story follows the traditional tale with the ball, the prince, and it ends happily ever after.  However, Ella’s Big Chance ends with the happiness of Ella and another.

Hale, Shannon and Dean Hale, illustrated by Nathan Hale. Rapunzel’s Revenge. 144p. Gr. 4-8.
Rapunzel is here as you have never seen her before! Lied to as a child and put away by the woman she thought was her mother, Rapunzel escapes her prison and sets off to save her true family. Along the way she joins up with Jack, an outlaw, who helps her navigate rough terrain and those who mean harm. Rapunzel’s Revenge is an entertaining, Western, graphic novel twist on the traditional fairy tale.

Marcantonio, Patricia Santos, illustrated by Renato Alarcao. Red Ridin’ in the Hood: and Other Cuentos. 185p. Gr. 3-7.
Red Ridin’ in the Hood is a collection of eleven classic fairy tales with a Latin twist. The stories are humorous and are accompanied by full-page illustrations. Also provided is a glossary for the Spanish words incorporated into each story.  Discover a new side to Little Red Riding Hood, Aladdin and the Magic Lamp, Beauty and the Beast, and many more.

Napoli, Donna Jo. Crazy Jack. 134p. Gr. 6-9.
This retelling of Jack and the Beanstalk takes place in medieval England where young Jack’s father has lost everything and has disappeared from the cliffs while chasing treasure. The guilt he feels over his father’s death has earned him the name “Crazy Jack.” As the story goes, he obtains magic beans, grows a beanstalk, and comes upon an abusive giant and his wife. This tale ends with acceptance and Jack united with his true love.

R.A.F.T. is an activity that integrates reading and writing.  It is a way for the reader to take an active role in the story and creatively explain a situation in the work from the perspective of a character. In addition, it is a higher-level thinking activity that requires the reader to go beyond basic comprehension of the material. The reader has to abandon his or her own opinions of the story and enter the mind of a character.

The critical aspect of this activity is that the reader must truly understand the chosen character and his or her motivations and personality traits. By accepting this adventure, you have the opportunity to become the author of the story who creates an adventure for the characters you have learned about in this journey through The Exquisite Corpse Adventure. To complete this adventure, let’s first understand what R.A.F.T. means.

R = ROLE of the writer. Which character will you become?
A = AUDIENCE of the writer. To whom are you writing?
F = FORMAT. What format will the writing take? A letter? Song lyrics? Classified ad? Poem? Etc.
T = TOPIC. What is the subject or the point of this piece? 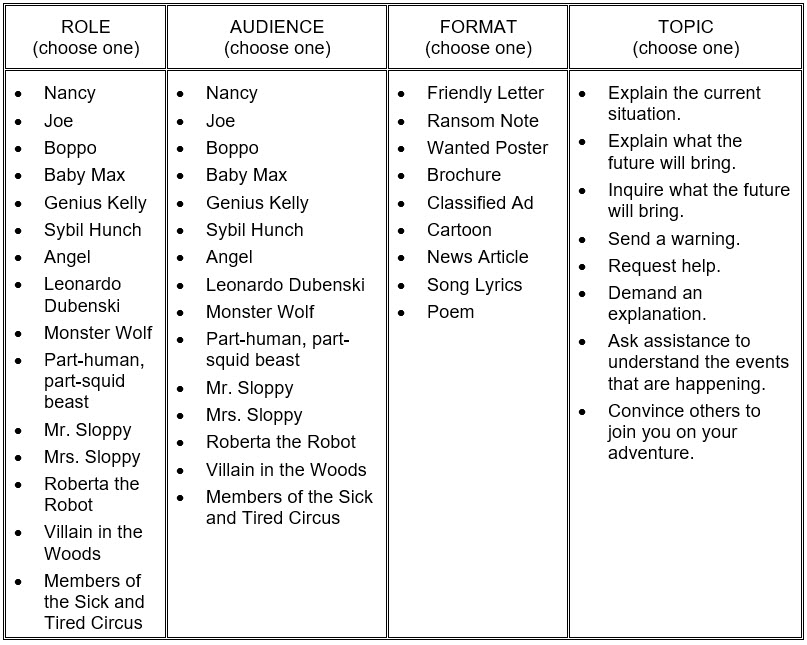 For example, you might choose to be Nancy writing a friendly letter to Sybil Hunch inquiring what the future will bring. Another example might include you being Angel designing a brochure for the members of the Sick and Tired Circus to try and convince them to join you on your adventure. The possibilities are endless. Chose one topic from all the categories, and then you can begin to create your writing adventure.

Visit “Talk Art! The Artistic Tradition of the Gingerbread House” for a discussion of how the gingerbread house has been depicted not only in The Exquisite Corpse Adventure, but in other art and literature as well. This article also includes two complementary art activities.

Despite Nancy’s urgent caution, Joe and Genius Kelly begin eating the gingerbread house. They are so famished, they eat with abandon. Nancy continues to plead with them to stop eating, but they both continue eating until the drugged gingerbread forces them both into deep sleep. Have you ever been so hungry that you ate something you were unsure about? Nancy is likely to be as hungry as Joe and Genius, but she is able to maintain control and not eat the gingerbread. Have you ever been in a situation in which someone lost control and you couldn’t stop them? Are you surprised that Genius Kelly—the twin’s protector—does not heed Nancy’s warnings? Do you see this as a role reversal, a situation in which the child is taking on the role of the adult? How do you think a child feels when he or she is the one who tries to control the behavior of an adult?

A foil is a “character who, by contrast with the protagonist, serves to accentuate that character’s distinctive qualities or characteristics.” Would you classify the character of Genius Kelly as a foil to Nancy? If so, is Genius Kelly also a foil to Joe? Think about the events in this episode, as well as in previous episodes. How do the decisions and actions of Genius Kelly contrast with the decisions and actions of Nancy and Joe? Cite examples.

After Joe and Genius Kelly have fallen asleep, Nancy is left to deal with Boppo on her own. When Boppo suggests that Nancy go inside with him while he takes apart the robot, the narrator lists a series of choices for Nancy, “She could have walked away…She could have abandoned her sleeping brother and the worthless pig. She could have left the half-assembled robot to her fate…” Can you think of any other options Nancy might have? Nancy chooses to follow Boppo into the gingerbread house. What do you think this says about her? Put yourself in Nancy’s shoes. What would you do in her situation?

The twins discover Roberta’s heart toward the end of this episode. Roberta recognizes its presence, and “…her torso came to life. The robot chirped and sang…She emanated hope.” Why do you think a robot needs a heart? How do you think Roberta will change when the heart is inserted? Will the heart provide a mere physical function or an emotional function or both? Can you think of another story in which a character longed for a heart? Why did that character wish for a heart?

Like many of the preceding episodes, Episode 16 ends as a cliffhanger. Who or what do you think is creating the shadow in the door? Might it be friend or foe? A character we know…or a new one to be introduced? 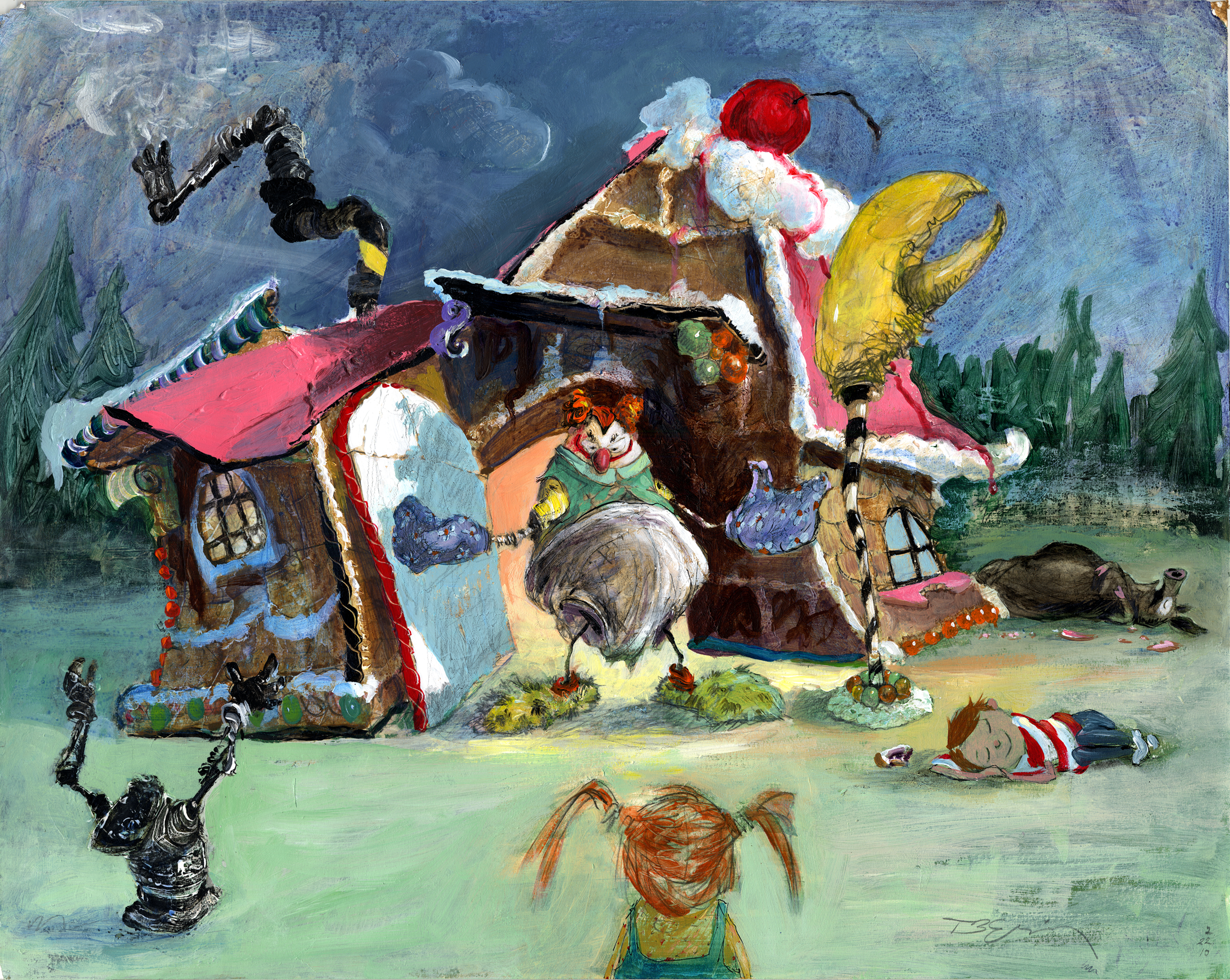