“A raspy voice scraped the air. ‘I’ll get you, Nancy and Joe,’ it said, ‘and your little robot, too.’

The voice had come from the living room, down the hall from the bedroom where the twins were now.”

Aardema, Verna, illustrated by Petra Mathers. Borreguita and the Coyote: A Tale from Ayutla, Mexico. 25p. Gr. PreK-2.
Coyote thinks that a lamb dinner is just the thing, but Borreguita (“little lamb”) slyly tricks the hungry carnivore out of his gustatory pleasures. The lamb escapes being Coyote food by using Coyote’s own greed against him. Aardema’s storytelling makes this a delicious read-aloud, and Mather’s glowing palette of warm oranges, hot pinks, and cool greens add to the visual feast.

Carbone, Elisa, illustrated by E.B. Lewis. Night Running: How James Escaped with the Help of His Faithful Dog. 40p. Gr. K-4.
James plans his escape from slavery with one regret: he must leave his noisy dog Zeus behind. Zeus, however, will not be left, and the loyal dog proves his mettle by fighting slave catchers, hunting squirrels for food, and helping Jim across the Ohio River. This evocatively illustrated picture book is based on the true story of James Smith, who successfully escaped slavery in the mid-eighteenth century.

Lunge-Larsen, Lise, illustrated by Mary Azarin. The Race of the Birkebeiners. 32p. Gr. K-3.
In thirteenth century Norway an infant prince is threatened by nobles seeking to keep him off the throne. The Birkebeiners, soldiers loyal to the baby’s dead father, help the prince and his mother escape across the mountains in a freezing blizzard. Hand-tinted woodcuts depict the harrowing adventure in dramatic compositions. This retelling is based on “Håkon Håkonssøn’s Saga,” penned by Sturla Tordsson in 1264.

Aiken, Joan. The Wolves of Willoughby Chase. 168p. Gr.5-8.
Bonnie and Sylvia have nowhere to turn when their wicked governess takes over the family manse and send the two girls to a dreadful orphanage. Will the brave little orphans escape the ravenous wolves roaming the snowy countryside? Will justice be served and the villains confounded? Set in an alternative eighteenth century England, this adventure rollicks through the Victorian tropes later imitated by Lemony Snicket, and is a terrific read-aloud.

Coder, Zizou. Lionboy. 304p. Gr. 4-8.
In the not-too-distant future a boy with the ability to speak the language of cats sets out from London to seek his kidnapped parents, only to find himself on a Paris-bound circus ship learning to train lions. Chases and escapes keep this fast-paced novel speeding toward a cliff-hanging conclusion. This is the opening title in a trilogy concluding with Lionboy: The Chase and Lionboy: The Truth.

Hehner, Barbara. The Tunnel King: The True Story of Wally Floody and the Great Escape. 160p. Gr. 5-9.
Wally Floody, a Royal Canadian Air Force pilot, was shot down over Germany in 1941. A prisoner of war in Stalag Luft 3, Floody became “the Tunnel King,” and helped build the escape tunnels for the most famous POW breakout of World War II. Read this and then sit down for a family viewing of The Great Escape, the award-winning film for which Floody served as consultant.

The Robot (Roberta) in Episode 14 of The Exquisite Corpse Adventure is an example of personification. The Robot is a non-human object that takes on human characteristics (and even gets a “human” name from Nancy!)

Personification examples can be found in a variety of manuscripts and poems. Personification poetry became popular in the 18th century–and is still popular today. By using personification, the reader can visualize the action or emotion. Famous authors who used this form of personification include Emily Dickinson (“The Train”), Langston Hughes (“April Rain Song”), and Joyce Kilmer (“Trees”). So, begin by reading these poems and others that use personification.

The online lesson plan titled “Dancing Minds and Shouting Smiles: Teaching Personification Through Poetry” includes a series of lesson plans on this topic, created by Erin Lassiter. This resource is available on the ReadWriteThink website, which is sponsored by the International Literacy Association and the National Council of Teachers of English.

Within these lesson plans you will find:

When Objects and People Fly in Art

Roberta reached out and, after a couple of groping attempts – she couldn’t see, of course – located the doorknob and threw open the door. Joe scooped up the robot and ran.  Nancy hurled the chicken and the salami at the wolf as hard as she could, then raced out the door and slammed it behind her.

The cradle was directly over the front lawn. Not on the lawn, but hovering in the air ten or twelve feet above it.

“Human chain!” Joe shouted. He hurried to position himself beneath one of the cradle’s giant rockers and went down on one knee. Nancy was on his shoulders in a flash. Joe stood up and took Roberta by the hand.

“Alley-oop!” Joe swung the robot up toward Nancy, who caught the other hand.

“Hey! Cut it out!” Joe yelled, staggering a little.

Roberta stilled her arm immediately and let out a couple of apologetic-sounding beeps. A series of mechanical, electrical, and hydraulic sounds ensued as the robot busily maneuvered herself until she was doing a one-armed handstand on top of Nancy’s head. She was now high enough to grab the cradle’s rocker with her free hand.
— From Episode 14: “Skills” by Linda Sue Park

James Ransome’s wonderfully whimsical illustration for Episode 14 is light as air. If we had any doubt that a cradle—the legendary The Cradle of Time, no less—could levitate and take flight, his luminous watercolor has suspended all disbelief, literally, in midair! Take a close look at James’ illustration with your kids and ask them what they think James has done to make it appear as if the cradle is flying. If James had chosen a heavier medium, like oil paint, instead of a transparent medium like watercolor, would the painting have been more convincing or less convincing? Why or why not? What viewpoint, what perspective, has James chosen to view the cradle’s flight from—from the air above looking down? Looking up into the air from the ground or head-on from a great distance? Does the perspective help or hinder the illusion that the cradle is floating in the air? James has painted something on the hillside that makes the illustration all the more convincing. See if your kids can figure out what he has done—they might like to imagine looking out over a vast landscape on a sunny day with big huge billowing clouds floating in the sky, and the shadows those clouds cast over the countryside!

Children’s’ books abound with images of flying people and objects.

The books Peter Pan and Tar Beach feature children magically flying through the air. Both are great books to read aloud. Check out these books from your local library and go through the illustrations in both books with young people to see how the illustrators convince readers that people are taking flight. 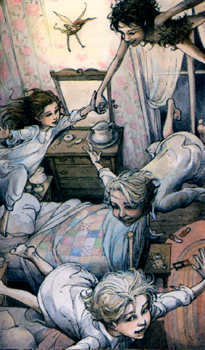 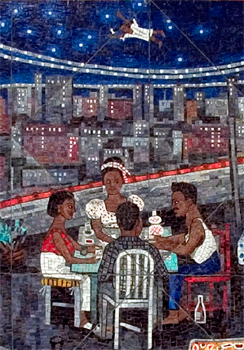 Illustration from “Tar Beach” written and illustrated by Faith Ringgold

In David Wiesner’s many books, all kinds of living things take flight: frogs, pigs, scientific experiments, broccoli, turnips, and more! Share David’s books and illustrations with your kids and discuss the many different viewpoints that David uses to convince us that objects and animals are flying.

Illustration in “Tuesday” by David Wiesner

Borrow T.H. White’s book The Sword in the Stone (it may be the first section of a larger volume entitled The Once and Future King) and read the scene aloud when the young King Arthur, Wart, gets lost in the forest and stumbles upon the wizard Merlin. Merlin serves him tea with all the pots and spoons and cups and saucers taking flight in the air. Invite your kids to discuss the scene and then illustrate it themselves. See if they can take cues from James Ransome and convincingly draw objects in flight!

The robot—now pieced together with two arms in a torso—“boots up” in this episode. Joe speaks to the robot directly and says, “C’mon, buddy.” Nancy reacts to this masculine reference in annoyance. In fact, the narrator tells us, “She was beginning to feel annoyed at the paltry number of females in this adventure.” Make a list of the characters Nancy and Joe have encountered since Episode 1. Are there more male characters than female characters? Why do you think the writers have introduced so many male characters? How might the story be different at this point if there were more female characters than male characters?

Nancy decides for herself that the robot is a girl, and she bestows upon the robot a female name, Roberta. Can a robot be male or female? Why do you think Nancy wants to believe the robot is a girl? Do you think that humans have a tendency to anthropomorphize (ascribe human attributes to) technology? If you could have a robot, would you want it to be a boy or a girl? What would you name the robot?

Although Roberta the robot is composed of only a torso and two arms, she can move, hear, and communicate effectively with beeps and other sounds. How do you think this is possible? Have you read other stories or watched any movies that feature robots as characters? Can you think of a robot character that can communicate without speaking?

For a list of great books that feature robots, check out the list of suggested reading for Episode 13. 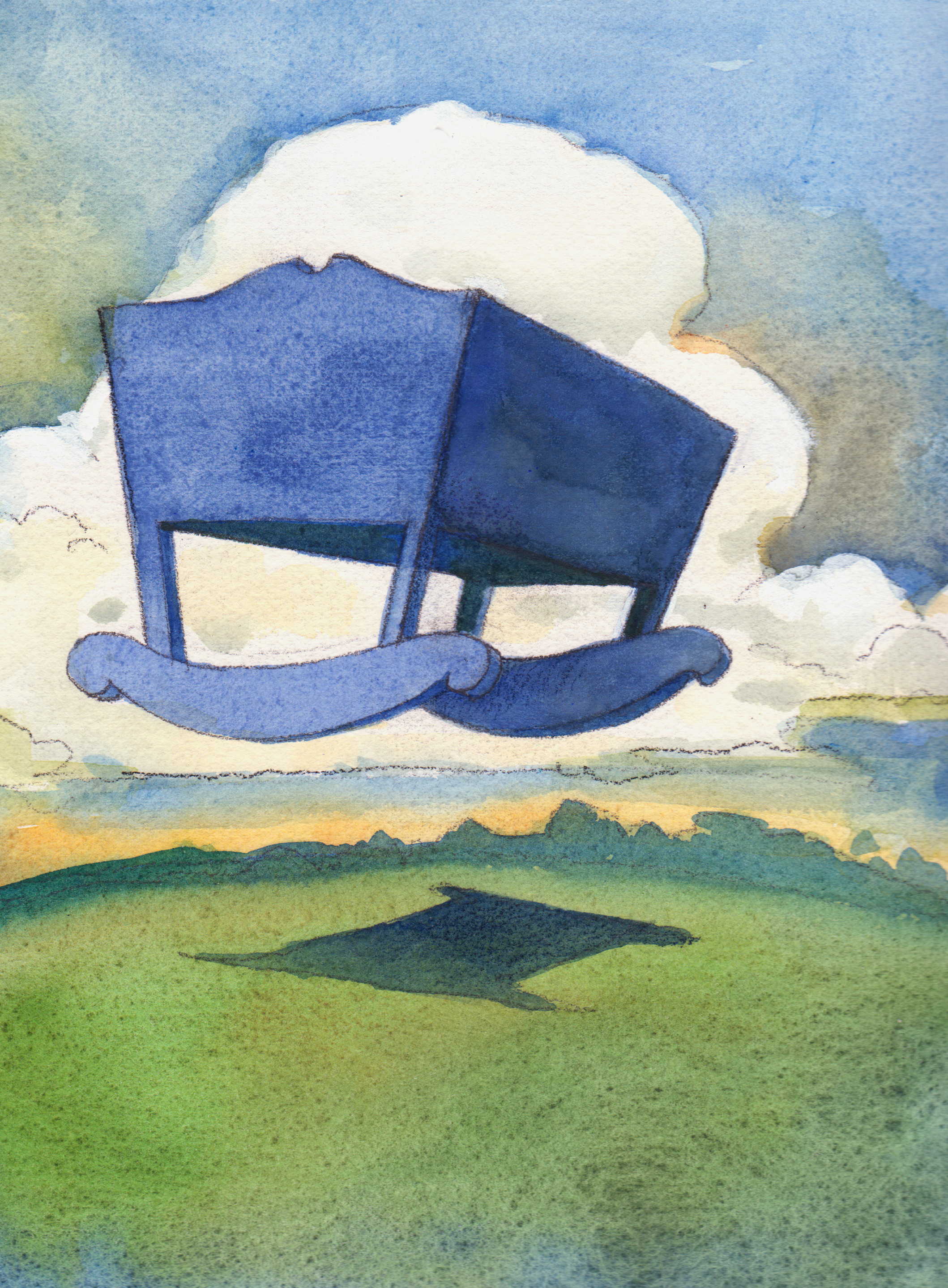