“Out of the Cradle, into the Fire”
by M.T. Anderson, illustrated by Chris Van Dusen

When the twins opened their eyes, they were in a living room. In a house.

It was a living room like many others, with wall-to-wall carpeting and a plate-glass window and a fake fireplace. But it was unlike many others, because it had been converted into a laboratory. There were all sorts of machines wired to other machines, and someone had written equations in chalk on the floral wallpaper.

Mrs. Brains is tired; looking after a genius baby is hard work! When Baby Brains comes to the rescue, building a RoboMom to help out with the chores, things are looking up. But soon, RoboMom starts helping in ways that aren’t so helpful.

Grey, Mini. Traction Man is Here.  32p. Gr. PreK-3.
Traction Man is invincible. As played with by a young boy on Christmas morning, he vanquishes poison dishcloths, dangerous brooms, and sinister pillows. But is he a match for Granny, and her hand-knit (humiliating) outfit? This hilarious romp is free of sentiment, and full of adventure!

Pinkney, J. Brian. Cosmo and the Robot. 32p. Gr. PreK-2.
Cosmo, who lives on Mars with his family, is dismayed when his best friend, robot Rex, takes a spill and suffers an unfortunate personality injury. A Super Solar System Belt, a gift from his parents, is no consolation, until he figures out a way to use it to reassemble Rex.

Dunkle, Clare B. The Sky Inside. 240p. Gr. 4-8.
Martin is curious about the nature of his domed-suburb world, with food that arrives on mysterious railway trains, and children who disappear on them. But when his genetically-engineered sister departs, as part of a product recall, he sets off, with his trusted robotic dog, on a search for the truth.

Siy, Alexandra. Cars on Mars: Roving the Red Planet. 64p. Gr. 4-8.
When NASA deployed Spirit and Opportunity, two ATV-style remote-controlled vehicles to Mars, they were expected to last 90 days. Five years later, they continue to roll across the red terrain, collecting pictures and data, and sending them back to Earth.

Varon, Sara. Robot Dreams. 208p. Gr. 3-12.
Dog longs for a companion, and is thrilled when robot arrives. They watch movies. They visit the library. But a trip to the beach has disastrous, irreversible consequences. This almost wordless graphic novel is poignant, affecting, and unforgettable.

A genre is a loose set of criteria for a category of composition. The term is often used to categorize literature, but is also used for any other form of art. Genres are vague categories with no fixed boundaries, they are formed by sets of conventions, and many works cross into multiple genres by way of borrowing and recombining these conventions.

Your mission, should you choose to accept it, is to “map” the action in this chapter, noting the references to fantasy and the references that are more science fiction in nature.

Below here is an example of a concept map.  You can use this – or create your own!

“Pictures fell off the walls. On the other side of the door, there was a zap. And then something was in the living room laboratory, just down the hall. Something was breathing. Nancy and Joe looked at each other in horror. And by their knees, glinting dully, the legless, headless robot began to move.”
— From Lucky Episode 13: “Out of the Cradle, Into the Fire” by M. T. Anderson

Have your kids take a very close look at Chris Van Dusen’s illustration for “Lucky Episode 13: Out of the Cradle, Into the Fire” by M.T. Anderson. Chris has done something very different in this illustration. In every other illustration he has created for The Exquisite Corpse Adventure he started out painting on a white sheet of illustration board. But in this illustration, Chris painted his whole board black, laying a “ground” and then let it dry before he began painting. Instead of adding middle values and dark values on the figures, objects, and room in his composition—as he would painting on a white board—he worked in a totally opposite direction adding middle and light values. Colors look different painted on a black background; they appear more intense. And a black ground in a painting can add an air of mystery and danger.

Most often illustrators and painters choose to paint on a white ground; painting on a black ground is different, and fun. But often, painters and illustrators tone their paper or canvass, painting a wash of a color’s middle value over the picture space, choosing colors in earth hues like burnt sienna or burnt umber, or even verde (green) hues. That way a painter can add both dark and lights to the middle tones, working in both directions of the value scale. Working on paper or canvas toned with a middle value color helps the artist render his or her subject matter in a way that appears more dimensional. (See the discussion of light and dark values and rendering in painting in “Talk Art! Contrasting Light and Dark Values.”

Have your kids reread Episode 13 and ask them why Chris Van Dusen might have chosen to use a black ground for this particular illustration.

Kids most often draw and paint on white paper or board. Have them experiment with painting simple objects on a white and black board. Obtain pieces of black and white tag or illustration board and cut it into eight pieces of the same size and shape—the pieces of board should be at least 5 by 8 inches. On a table, place a red apple, an orange, a lemon, and green pepper. Let the kids practice drawing the fruit and vegetable on a scratch sheet of paper or in their sketchbook. Then give them each four white boards and four black boards. Have them sketch the fruits and vegetable, one each on both the white and black board. They may want to use a white piece of chalk to sketch on the black board. Using tempera or gouache paint, they should paint the fruits and vegetable using light, middle, and dark shades of their colors, trying to use the same colors and shades on drawn fruits and vegetables on both the white and dark boards. When the small paintings are finished and dry, line them up for all to see and discuss if and how the colors look different painted on the white board or the black board. If your kids are intrigued with painting on black board, they may want to do their own illustration for Episode 13 using black board!

Have your kids reread Episode 13 and discuss all the possible scenes they might illustrate. Then have them sketch out their own illustration of a particular scene in their sketchbook or on scrap drawing paper. Writers write and rewrite in order to create great stories; illustrators sketch and re-sketch in order to come up with just the right visual picture to depict a scene in a story. Once your kids have a great sketch to work from, have them transfer their drawing to a piece of pastel paper. (Pastel paper is available in many lightly toned colors and in many sizes. The most convenient way to buy it is in pads available at your local art or crafts store. If you do not have pastel paper, construction paper in middle value colors can be used.)

Once your kids have transferred their drawing onto the pastel paper (the paper can be any color except white!), have them color and shade their illustrations using pastel chalks or use any kids’ brand chalks, like Crayola chalks, if pastels are not available. Since pastel paper itself is a lighter medium value, your kids should add both light and dark colors and shades to render the shapes in their drawings, working both ends of the value spectrum of all the colors they use.

When all the illustrations are finished, share and discuss them with each other!

For some online demonstrations of tonal painting, go to:

A back-story is a literary/storytelling device that can provide readers with a history of the story’s characters and events and situations creating context for the unfolding story. Back-stories can fill in the blanks, informing readers about a character’s past. Often, the information provided by a back-story helps the reader begin to weave the threads of the plot into a whole.

One way writers engage readers is by respecting their intelligence and including them in on the storytelling process. Instead of explaining or telling things to readers with trite, pat, or generic words or phrases, writers reveal a character’s thoughts and emotions using dialogue, action, and vivid, specific description allowing readers to infer or guess a character’s feelings, emotions, or intent. For instance, instead of writing, “Red Riding Hood went into the forest and was tricked by the evil wolf” – it would be far more interesting to write a scene for Little Red Riding Hood that uses sensory language and imagery, dialogue, and action. A writer could describe the shadowy isolated forest landscape, show the enticing advances of the “the big, bad, wolf” as he warmly wraps his arm around Red Riding Hood’s shoulder, slickly tricking her into revealing her destination. When a writer “shows instead of telling,” the reader must use his or her brain and powers of deduction, to infer the wolf’s evil intentions. Basically, telling is boring; showing is interesting.

In one of the best books about writing, Bird by Bird, the author Anne Lamott shares advice she heard from fellow writer Alice Adams. Alice Adams sometimes uses a formula when writing a story—ABDCE—for Action, Background, Development, Climax, and Ending—

According to Lamott, “You begin with the action that is compelling enough to draw us in, make us want to know more. Back-ground is where you let us know and see who these people are, how they’ve come to be together, what was going on before the opening of the story. Then you develop these people, so that we learn what they care about most. The plot—the drama, the actions, the tension—will grow out of that. You move them along until everything comes together in the climax, after which things are different for the main characters, different in some real way. And then there is the ending: what is are sense of who these people are now, what are they left with, what happened, and what did it mean.” 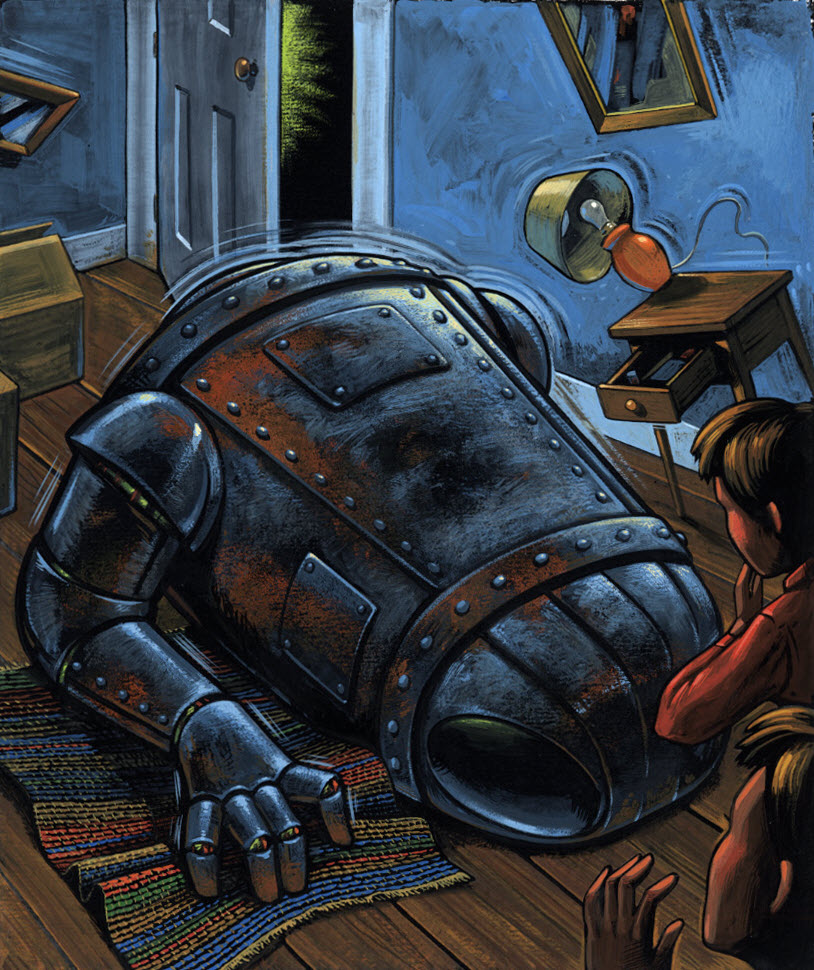