“The Shadowy Abyss of Our Own Fate”
by Lemony Snicket, illustrated by Timothy Basil Ering

“The cradle rocks above an abyss,” says an associate of mine, “and common sense tells us that our existence is but a brief crack of light between two eternities of darkness.” He is the sort of person who often talks in this sophisticated and somewhat depressing manner, and for that reason he is rarely invited to parties, but he nevertheless makes an important point. Life may seem very long, particularly when you are asked to help put away the groceries, but compared to the vast dark history of the universe, the time from your birth to your death is merely one short blink of light. Even a life story as tumultuous and complicated as that of Nancy and Joe is just a tiny speck in the enormous tumult and complication of life, and if you think too much about this sad, inescapable fact you are likely to feel like screaming.

Borden, Louise, illustrated by Erik Blegvad. Sea Clock: The Story of Longitude. 48p. Gr. 1-4.
When John Harrison invented the chronometer, a sea clock that could accurately determine longitude, he transformed sea travel forever. This elegant biography combines lyrical verse with lovely paintings to offer an impressionistic understanding of this intrepid and inspired traveler.

Chin, Jason. Redwoods. 40p. Gr. PreK-3.
A young boy waiting for a subway train finds a book about the great redwood trees, and dives in. In no time he finds himself on a fanciful, fantastic journey through the ages, as he learns about the majestic trees; long lives, and the many peoples who have witnessed them. He leaves the book at his destination, where a girl picks it up, and the adventure begins anew.

Scieszka, Jon, illustrated by Lane Smith. Knights of the Kitchen Table. 32p. Gr. 2-5.
In the Time Warp Trio’s very first outing, Joe, Fred and Sam set out on an adventure to Arthurian Britain, where they outwit a sinister Black Knight, and conquer a giant by setting him against an equally menacing dragon. With Scieszka’s trademark zany dialogue and Smith’s effervescent, quirky spot illustrations, this is an easy-to-read early chapter book that is sure to charm.

Galloway, Priscilla and Dawn Hunter. Adventures on the Silk Road. 168p. Gr. 5-8.
Co-authors Galloway and Hunter offer up three vivid, informative tales of travel along the silk road. Sometime after 1162 Genghis Kahn moves his armies along the way, and later secures the road for merchants. In 1271, Marco Polo makes his famous journey from Venice to China. In 1629, Xuanzang, a Chinese Monk, makes a 16 year long pilgrimage to India.

Hoffman, Mary. Stravaganza: City of Masks. 256p. Gr. 6-12.
Lucien, a contemporary boy living in England (and being treated for cancer), sleeps every night with an old Italian journal, a gift from his father, and finds himself transported to Bellezza, a city in a dimension parallel to sixteenth-century Venice. Intrigue, deception, and an incredibly colorful setting combine for a novel that is both gripping and affecting.

Stead, Rebecca. When You Reach Me. 208p. Gr. 4-7.
This complicated, enigmatic, and utterly engrossing novel is something of a puzzle. Between squabbles with her best friend, dramas in her New York neighborhood, and coaching her mother for a turn on a television game show, Miranda is trying to put together some mysterious pieces and figure out just who, and when, is the man under the mailbox…

It is important to understand the series of cause and effect, or plot, of a story in order gain understanding of what has been written. Plot can be defined as a series of events in a story. Summarizing is also important when reading in order to identify the main ideas. This activity encourages students to apply the knowledge of plot, sequencing, synonyms and richer vocabulary, summarizing, and characters’ emotions.  While reading The Exquisite Corpse Adventure, students may use the plot roller coaster to organize the events of one or more chapters.

In order to complete the plot roller coaster, students must first brainstorm a list of synonyms for positive emotions and negative emotions and rank them in intensity. After that, students will complete the first graphic organizer, brainstorming events that have happened in chronological order. Students may have different ideas about how the characters felt at different times and it is okay to have multiple answers. For example, some students may have felt that Nancy and Joe discovering their father would bring on a negative emotion such as hopelessness or dejection. 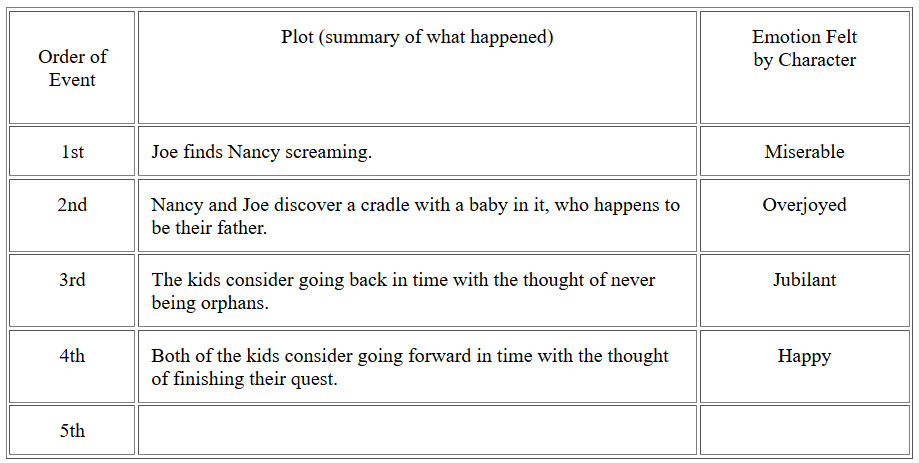 After the plot has been summarized, sequenced, and linked to an emotion, students may begin working on their plot roller coaster poster. They will need to draw a line, splitting the poster in half, representing a neutral emotion. They must label the different emotions on the left side of the poster according to the emotions’ intensity. After that, students may begin to plot their summaries like a graph in chronological order. Students may include an illustration to represent the plot statement. Students should then connect the plot points to show the change in emotion throughout the story or chapter. 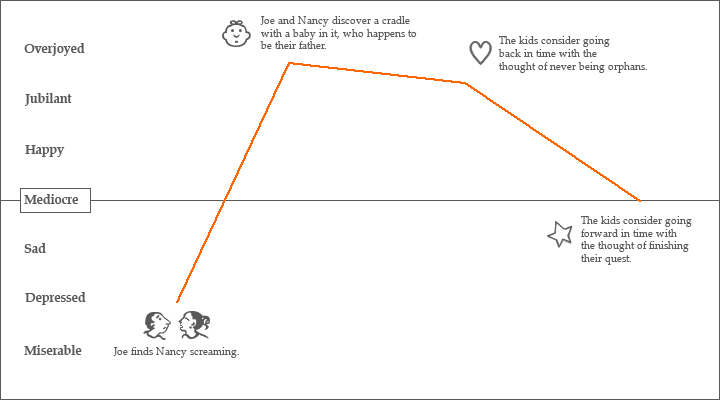 This lesson was adapted from a strategy developed by the Eighth Grade Language Arts Department at Blackhawk Middle School in Bensenville Illinois.

Comparing and Contrasting Color Palettes and Compositions in Paintings

“Not fifty feet away to the north she stood over a small, wavering silhouette. Even as Joe and the arm drew closer they could not discern what it was. It was shaped something like a boat or perhaps a bed, resting on two upside-down crescent moons like the runners of a rocking chair. But each time the mysterious item moved, it seemed to acquire an enormous shadow – a swath of blackness that made the whole beach as dark and vast as the universe itself.”
— From Episode 12: “The Shadowy Abyss of Our Own Fates” written by Lemony Snicket

With a color palette of analogous hues—ultramarine blues, turquoises, deep blue violets, and blue grays—Timothy Basil Ering has created an atmospheric illustration for Lemony Snicket’s episode that is fraught with mystery. The illustration successfully conveys the sense of disquieting desolation and apprehension dictated by the text, “But each time the mysterious item moved, it seemed to acquire an enormous shadow – a swath of blackness that made the whole beach as dark and vast as the universe itself.” Yet, the warm sand and the red decorative elements on the cradle, hint at the whimsy that is ever present in story.

Have your kids take a look at the painting at right, Oarsmen Rowing on the Yerres by French Impressionist painter Gustave Caillebotte, and compare it to Ering’s illustration above. Ask them to compare and contrast color schemes and the inclusion or exclusion of human forms. And also ask them if they see any similarities in the design or composition of the painting, helping them to identify the triangular forms of the cradle in Ering’s illustration and boat in Caillebotte’s painting. The wide bases of the triangular forms of cradle and boat draw the viewer into the pictures, making the viewer feel a participant in the scene instead of being merely an observer.

The “art” of photography grew and expanded in the late 19th century. The Impressionist painters were very aware that the concept of “cropping” of photographs, the ability to zoom in and out of picture in order to “frame” it more intimately, could be used on the picture plane of a canvas or paper in order to pull the viewer into the painting. Timothy Basil Ering has framed his illustration with that same intimacy in mind, using strong diagonals to add excitement to his composition. Instead of showing the whole boat from the side or the front, he has “cropped” the boat creating a triangular shape that draws us in, and we see it from above, peeking into it along with Joe and Nancy.

Read more about the use of diagonal lines in visual compositions in the Talk Art! article for Episode 1.

There is also a “Surrealistic” quality in Ering’s illustration, a meaningful coincidence for an Exquiste Corpse Adventure illustration, since it was the Surrealist movement that gave the name “Exquiste Corpse” to the written and visual game of progressive storytelling and drawing. (See “The History of The Exquisite Corpse Art Form and How It Is Played” and “A Guide to Progressive Stories.”)

With your kids, take a look at some of the paintings of Surrealist Metaphysical Italian painter Giorgio de Chirico, below. 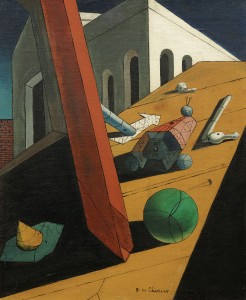 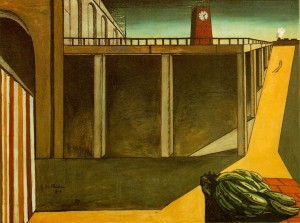 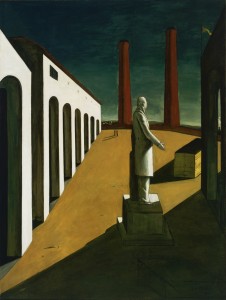 Last, have your kids take a look at samples of French Symbolist painter and printmaker Odilon Redon’s prints and drawings below. His work is both enigmatic and mystical, real and unreal, human and monstrous. The kids will be fascinated by his work! 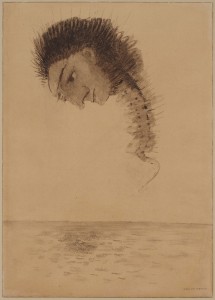 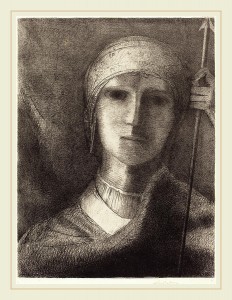 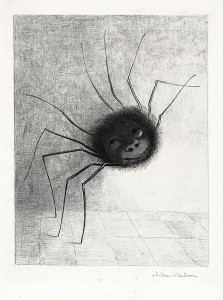 Do they see any similarities between Redon’s drawings and the way Ering portrays the figures of the old man and the infant in the “Cradle of Time” mentioned in this episode? Timothy Basil Ering may or may not have been influenced consciously or subconsciously by the work of Redon, De Chirico, and Caillebotte, but as a trained artist he is well aware of the long history of art that precedes him, and it could have influenced his illustration. What is important for your kids to know is that when they draw or paint, or create their own photographs or prints, the work of fine artists is available to them, and easily accessible in books, in museums, and on the Internet. They can be influenced and inspired by other artists; they can borrow techniques and styles, even ideas, from other artists, too.

Art Activity: Make Your Own “View Finder” to Draw an Outdoor Scene

What is a view finder? A view finder is basically a cut rectangular “window” in a piece of cardstock, cardboard, or thick paper that you look through to define or “crop” the subject matter or scene you want to draw or paint.

You may want to keep your view finders and use them when drawing people and still lifes or inside scenes. They are a great help when trying to compose the picture you want on the space of your paper or canvas.

Episode 12 opens with the line, “‘The cradle rocks above an abyss,’ says an associate of mine, ‘and common sense tells us that our existence is but a brief crack of light between two eternities of darkness.’” This quotation is actually a line from a book. Do you recognize it? If not, see if you can find it.

Who do you think the “associate” is? Is he someone the narrator knows? Based on this one quote from the associate, is he someone you would like to meet? The narrator makes a point to tell us that he is “rarely invited to parties.” Would YOU invite him to a party?

Tone is the author’s attitude toward the reader or the subject. How would you describe the tone of this episode? What makes you think this?

The Exquisite Corpse Adventure is being created as a progressive story game by fifteen authors and five illustrators. Can you tell a difference in the styles of the authors and illustrators as you read each episode? How would you describe Lemony Snicket’s style in Episode 12? Have you read any of Lemony Snicket’s books? If so, how does this Exquisite Corpse Adventure episode compare? Is it similar or different to his other work? How so?

The episode ends as a cliffhanger with no need for the twins to make a decision because they fall into the cradle. And the cradle “… [falls] in the direction the twins had feared most…” Which direction do you think this is? The past or the future? Or, do you think there might be a third option? If so, what is it? 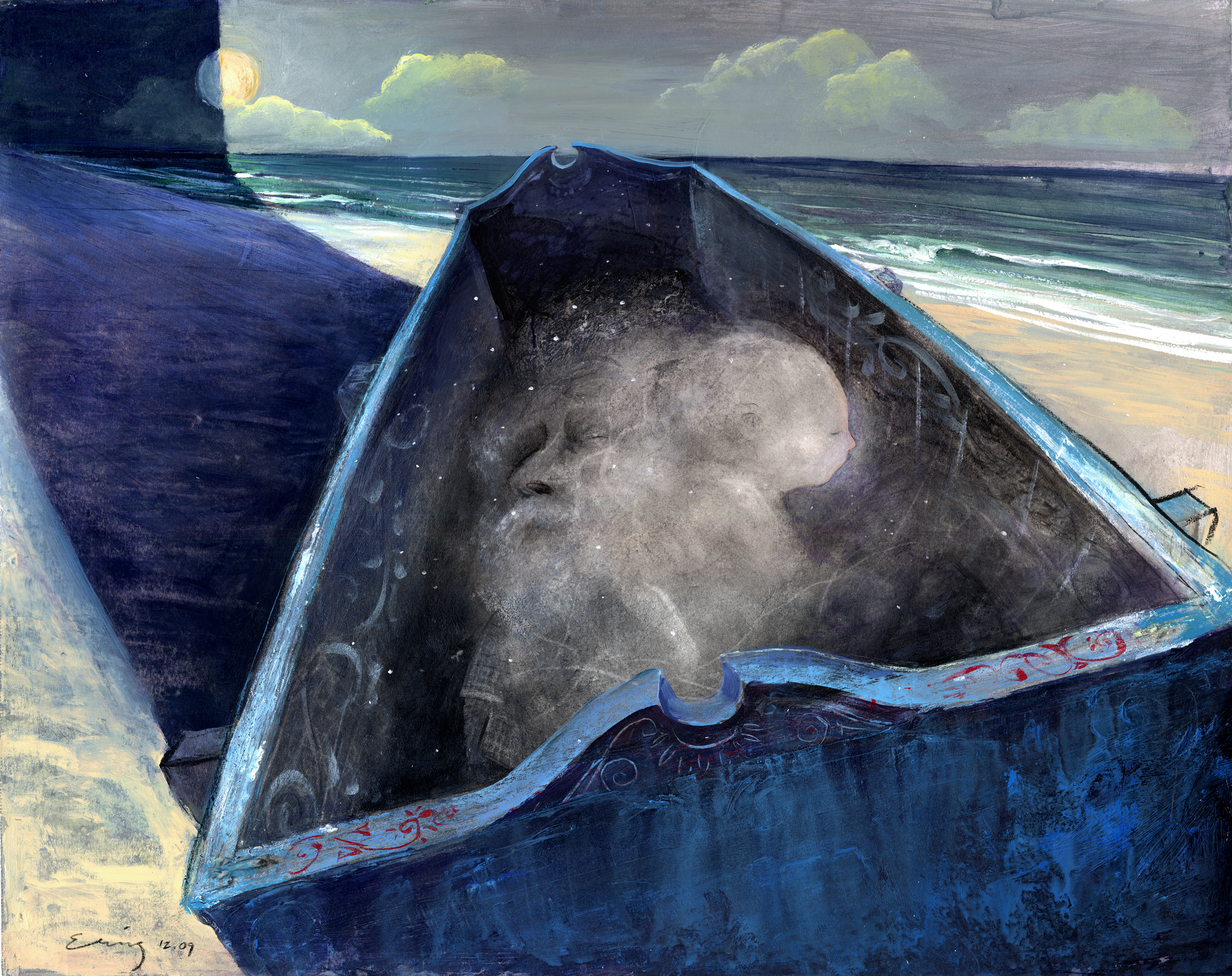