No matter your political leanings, if you are watching any of the impeachment trial, take a look at the tables for the two sides.  On the House table, there is ream after ream of evidence and books and papers.  On the President’s table is just a few notebooks.  Also, listen to the speeches.  The House Managers are presenting point after point, speaking 30-50 minutes a piece.  Brevity on the part of the President’s side is shocking; the opening by the President’s lawyer was three minutes.

I call upon all of us, Democrats, Independents, and Republicans to analyze this tragic fact, especially those of us interested in national literacy levels.

Even before President Trump was elected, experts and scholars were sounding alarms as to this day. For example, in a  2015 article in Psychology Today, David Niose said “for too long America’s social dysfunction has continued to intensify as the nation has ignored a key underlying pathology: anti-intellectualism.”  Earlier, in 2012, Elvin Lim published a book entitled “The Anti-Intellectual Presidency: the Decline of Political Rhetoric from George Washington to George W. Bush.” Susan Jacoby published “The Rise of American Unreason” in 2008, and Richard Hofstadter “Anti-Intellectualism in American Life” in 1963.  Susan Jacoby in fact wrote in The Washington Post,  ” If Hofstadter had lived long enough to write a modern day sequel, he would have found that our era of 24/7 infotainment has outstripped his most apocalyptic predictions about the future of American culture.”  We knew this phenomena was on its way!

What has been written since President Trump’s election?  Articles in everything from Salon (left-leaning) to The American Council on Science and Health (traditionally pro big medicine and big pharma), entitled “America Hits Peak Anti-Intellectualism,” “The Cult of Ignorance in the US,” and “Anti-Intellectualism is the Biggest Threat to Modern Society.” However, based in reason and scientific study, Matthew Motta in American Politics Research (2018)  noted: ” I find that anti-intellectualism is associated with not only the rejection of policy-relevant matters of scientific consensus but support for political movements (e.g., “Brexit”) and politicians (e.g., George Wallace, Donald Trump) who are skeptical of experts.”  We know anti-intellectualism is here! 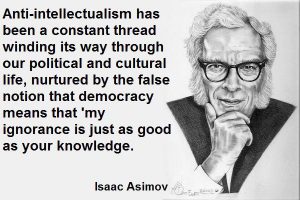 If we, as literacy experts,understand we MUST return to the reason of our forefathers, indeed to an emphasis on  critical thinking, we first must ask:  Why is the root cause of anti-intellectualism?

In 2008, Susan Jacoby said the three reasons are:  1) Video, screens, and social media (She says: “I cannot prove that reading for hours in a treehouse (which is what I was doing when I was 13) creates more informed citizens than hammering away at a Microsoft Xbox or obsessing about Facebook profiles. But the inability to concentrate for long periods of time — as distinct from brief reading hits for information on the Web — seems to me intimately related to the inability of the public to remember even recent news events”); 2) the erosion of general knowledge (which we also know affects reading progress); and 3) arrogance about one’s lack of knowledge.

In 2016, The American Council on Science and Health (ACSH)  noted three more reasons:  1) the democratization of information (anyone with the internet and five minutes can be an expert on anything); 2) every important topic has been politicized; and 3) attacks on the messenger, rather than the content of the message.

And, Motta’s scholarly discussion mentions political rhetoric as a potential catalyst, stating “At several moments in
American history, presidential candidates have attempted to capitalize on the public’s distrust of politicians and other elites by employing this type of anti-intellectual rhetoric.”

Do we have any solutions?

Susan Jacoby says we need a “serious national discussion about whether, as a nation, we truly value
intellect and rationality.” Alex Berezow (ACSH) relates we must “cool down the political rhetoric” and “leave plenty of room for disagreement on policy.” Motta’s study demonstrates “individuals holding high levels of verbal intelligence are less likely to hold anti-intellectual views than those with lower levels of verbal intelligence.”  How does Motta define verbal intelligence?  Thusly:  “a collection of cognitive skills that reflect one’s ability to broadly demonstrate comprehension of one’s vernacular language.”  In other words, LITERACY!

Let’s pick our jaw up off the floor now, get off our buns, limit our time on social media and/or listening to political meandering and get children back in their treehouses, reading! Let’s make sure they are back in their classrooms and libraries and around dinner tables, discussing those same books, face-to-face!