I learned that Ms. Lindgren, author of Pippi Longstocking and namesake for the world’s largest award for children’s and young adult literature, experienced quite an earth-shattering adolescence.  Despite the religious and societal norms of the times, she exhibited a hero-like sense of morality, sacrificing all and enduring even more for the sake of her young son.  Due to the the tears shed in this period of her life, she instinctively knew how to take the child’s side in any circumstance. (She worked for women’s rights and the elimination of corporal punishment all her adult life). 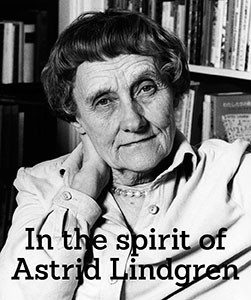 Yet, her childhood up to that point proved idyllic.  She described a childhood steeped in Swedish peasant life in the “age of horses.”  She noted “There were two things that made our childhood what it was – security and freedom. It felt safe having those two who cared so much for each other and who were always there should we need them, but who otherwise let us roam free and happily discover the fantastic playground we had in the Näs of our childhood.”  (Thus, Astrid became one of the world’s most influential environmental and animal right’s activists).

Most importantly for this readership, however, the oral tradition and reading were important to Astrid’s childhood community in Smaland, Sweden. She is quoted as saying:  “A childhood without books – that would be no childhood. That would be like being shut out from the enchanted place where you can go and find the rarest kind of joy.”  She in fact remembered her first experience with a read-aloud:  “And we sat there on the floor, my brother and I, and I heard her read the wonderful story about the giant ‘Bam-Bam’ and the fairy ‘Viribunda’. Yes, I could have died right there on the spot! It was in that moment that my love of reading was born. With the impatience of a four-year-old I stared at the strange, black curlicues that Edit was able to interpret but not me, and that through some strange magic suddenly could fill the entire kitchen with fairies and giants and witches.”

All such experiences rendered Astrid the perfect children’s author, one who did not sugarcoat her literature, but who exposed children to both the sorrow and joy of life.  As she states, her books gave child readers “a place in the world and the world a place in the child.”  All-in-all, however, Astrid believed a child’s book must be “good,” for she believed “children create miracles when they read.”  (Consider this magic:  “a farmer’s daughter from Sweden grew up to become an author beloved around the globe, translated into nearly 100 languages, and lauded by readers of all ages”).

Astrid also knew these miracles were needed on a macro-level, by the larger world itself.  She understood that children were sometimes treated cruelly, unable to protect their own beings from dysfunction, abuse and neglect, i.e. a childhood in which either food, shelter, attention, loving care, security, and stimulation of mind and body was lacking or even non-existent.  She understood the consequences, stating in her political writings:  “The characters of our future statesmen and politicians are formed before the age of five. It is terrifying, but it is the truth.”

Before the age of five!  Astrid believed, and devoted her life, to the pursuit of peace – the pursuit of a way for humanity to “distance ourselves from violence” and work toward becoming “quite simply new forms of human beings,” i.e. those who strive for peace.

Where to start, according to Astrid?  From the bottom, with the children and their magic – the enchanted world of children’s literature. 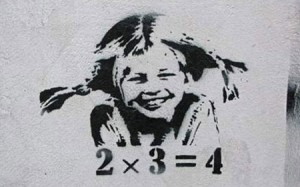