Recently, at the Young Adult Library Services Association’s presentation of the Morris and Non-Fiction for Young Adults Awards, the authors of the 2017 winning books spoke to a group of librarians from across the nation. 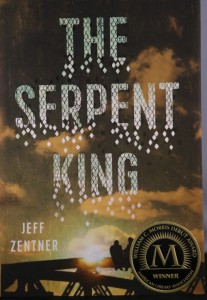 First, Jeff Zentner, a Tennessee native, spoke to the gathering about his 2017 Morris Award winning book, The Serpent King.  The Morris Award, initiated by YALSA in 2009, honors a debut young adult author, and is proving to include in its award and honor book listings some of the best literature within the genre.  The award’s namesake is William C. Morris, the publishing giant who advocated tirelessly for the wide dissemination of children’s and young adult literature.  Zentner explained his debut novel’s introduction was written on a bus to-and-from work on whatever notepaper he could find, an encouragement to authors struggling with time constraints.  He hopes the book serves as a light not only to budding authors, but also to readers of all ages, especially those who find themselves growing-up amidst the dark and foreboding reality of an unforgiving and close-minded family structure and/or cultural background.  Signing books after the program, Zentner spoke to spreading his own particular story with students from any background, for the lessons of The Serpent King speak to not only “snake handlers” but also “fanfare” bloggers and fashion fiends.  Learn more about the Morris Award here.

Following Zentner’s acceptance speech, Congressman John Lewis received a standing ovation as he walked to the podium to accept YALSA’s Award for Excellence in Non-Fiction, targeted for readers aged 12-18.   The award, initiated in 2010, honors non-fiction works whose subjects include everything from Benedict Arnold to John James Audubon.  Lewis’s March: Book 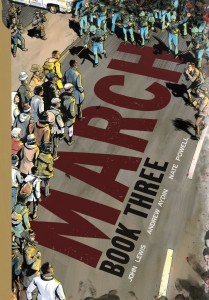 Three, steeped in graphics, chronicles several major events during the Civil Rights era, including the march across the Edmund Pettus Bridge.  During his acceptance speech, Congressman Lewis graciously thanked the librarians in his life who had contributed to his success, to include the award’s committee members.  He noted that a backpack he carried while crossing the Edmund Pettus Bridge held two books from his local library.  He does not understand, to this day, where these personal belongings were taken when Alabama state troopers violently attacked march demonstrators.  While speaking to the value of books and reading, nonetheless, Congressman Lewis insisted that “we cannot go back.”  Indeed, his book, and all fine young adult literature, both fiction and non-fiction, as awarded each year by YALSA, will help Americans “march” forward into a sustainable, happy future in which libraries and books play a key role in helping Congressman Lewis’s legacy remain intact.  Learn more about YALSA’s Non-Fiction Award here.